Riding with volunteers in Tanzania

For the past year, I have lived in Kibondo in Western Tanzania, where I worked closely with the Tanzanian Red Cross. I'm describing one of many days working with the Red Cross volunteers in one of the three refugee camps, Nduta refugee camp, which is home to nearly 100,000 people...

I wake up to crows making loud caws and take a look at the time. It's 7am already and the day awaits.
I get ready and off we go to Nduta camp, the camp is about 36.2 sq km
There are close to 300,000 refugees in the three camps in Tanzania. Although there is no conflict, the country has become a safe haven for people from nearby countries ridden with different forms of conflict.

Bumping and jostling in the car with every movement, the dust is all I see ahead of me as there is no tarmac. We arrive at Nduta just in time to catch the morning meeting. Right after the meeting, on cue, bicycles are rolled out. This is the daily routine. The volunteers ride the rocky paths of the camps to deliver family news to their fellow refugees. For some refugees, this is the only way to get any assurance of their family member's well being. They cherish these moments. Sitting at different call centres where we provide free phone calls to the refugees, I smile all the time till my face hurts. I see the way their faces light up when they hear a loved one's voice and it warms my heart.
I visit the camps often to supervise activities but on this day, I decided to ride with the volunteers for two days. On the first day, the bike ride started out as fun then it slowly became tedious as I hadn't ridden a bicycle in a while. The paths in the camps are not smooth and are no easy terrain for someone who doesn't have good control of a bicycle. 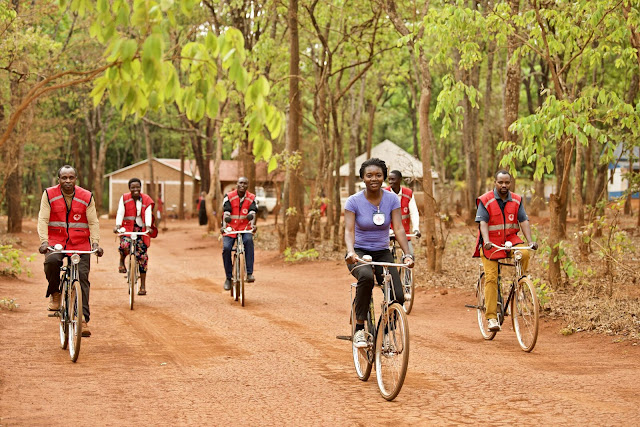 We visit and talk with our beneficiaries giving them feedback from their families and their joy is palpable. They offer up prayers for us and express gratitude unhindered. It makes me think that despite all they have lost and the conditions they live in, despite their uncertainty of what the future holds, their strength is inspiring. Some of them speak with such wisdom that I tend to try to put myself in their shoes, something I never succeed at. No matter how I imagine, it will never be the same. I only wonder how I would be if it were me. With everything, adding the loss of a loved one is in no way easy. I realise how our role to restore family links is crucial.

On the way back to the office in the camp, feeling like I had a sense of direction, I rode freely, happily, after the day's work. The ride was easier. At a point, the volunteer I was working with called out for me to slow down as she thought I was going too fast. I started to pull at the brakes but as I was coming to a halt, the bicycle tipped over and I was on the ground. 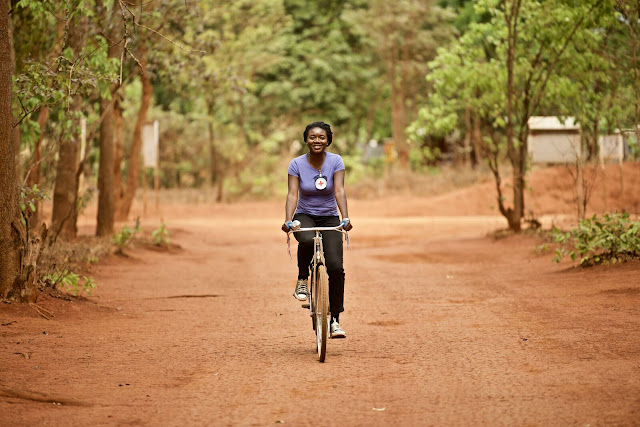 She certainly knew what she was saying as she rides on these grounds daily. Thankfully, I wasn't hurt.
We featured her in the video clip below. 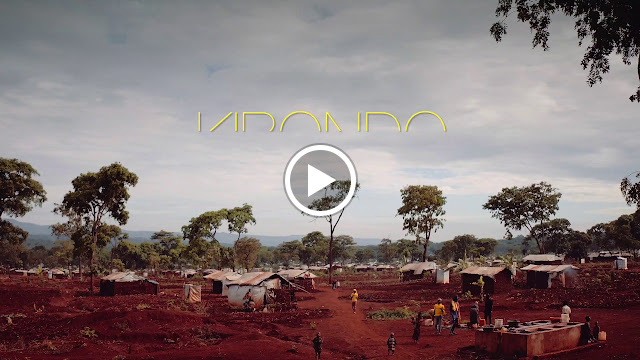 At the end of the day as we drove out of the camp, I had so much on my mind but gratitude mostly, as I wondered how the refugees cope and feel.
When I got home, I lay in bed exhausted, looking forward to riding the grounds of the camp the next day, as the squealing from crickets rocked me to sleep.

My time in Tanzania has been rather eventful....interesting, challenging, intense, but through it all, the reason we do what we do keeps me going.

We still find time to share moments like this.
As I prepare to leave Tanzania, I am grateful for the year I've spent here and pleased to have met and worked with so many different people.
Posted by Ene Abah at 07:21:00