Does the name of the island bring anything to mind? My best friend could not stop laughing and kept teasing me about it.

According to Google, Mafia Island is part of Tanzania's Mafia Archipelago, in the Indian Ocean. Large swaths of the island's southern coastline and surrounding waters are protected by the Mafia Island Marine Park. 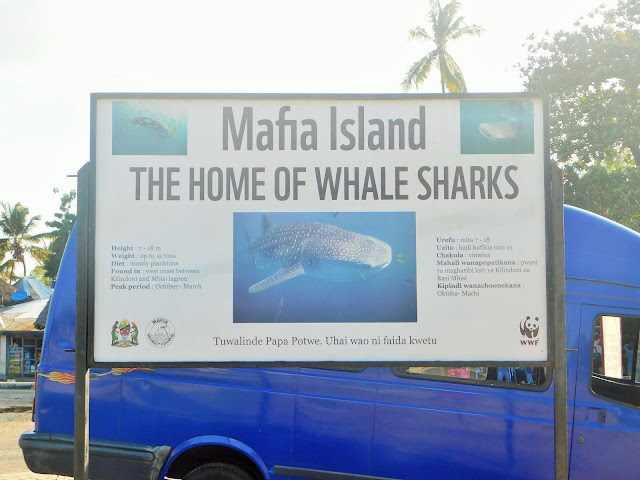 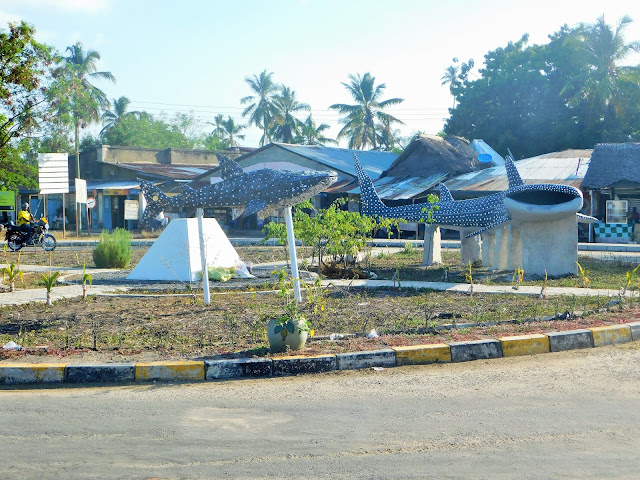 Getting there - The best way to get to Mafia from Dar es Salaam is by plane. There are companies that operate small air crafts and they fly regularly to all the islands. The two that go frequently to Mafia are Auric Air and Coastal Aviation. The air fare is different for residents and non residents. Auric Air had flights on the dates I wanted to visit and was less expensive. I paid $113 for a return flight between Dar and Mafia. For a non resident, it could be close to double that amount. The plane had 12 seats for passengers and the spots for the pilot and co-pilot/passenger. 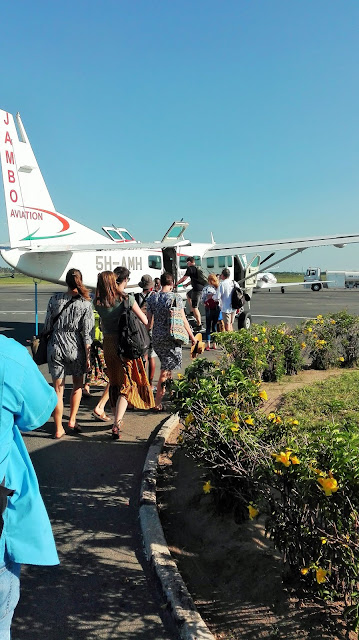 Accommodation - The part of Mafia I stayed in is called Utende. From my observation, the action in Mafia happens in this area. Hotels are in the Mafia Marine Island park. The lodge I stayed in was outside the marine park. 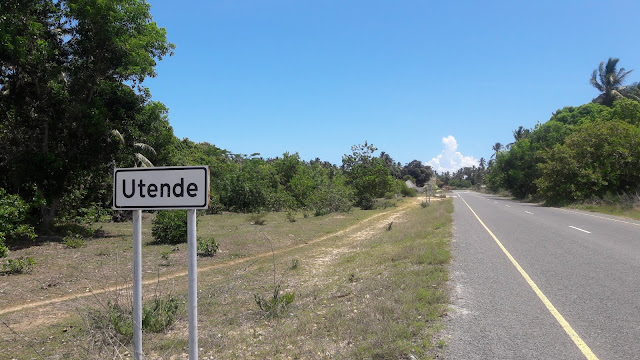 Most of the places I wanted to stay in were fully booked, I sent e-mails but no luck. My trip was planned last minute so I made all the arrangements the week before the trip. I stayed at Sea Front Mafia Lodge, I found it on booking.com. 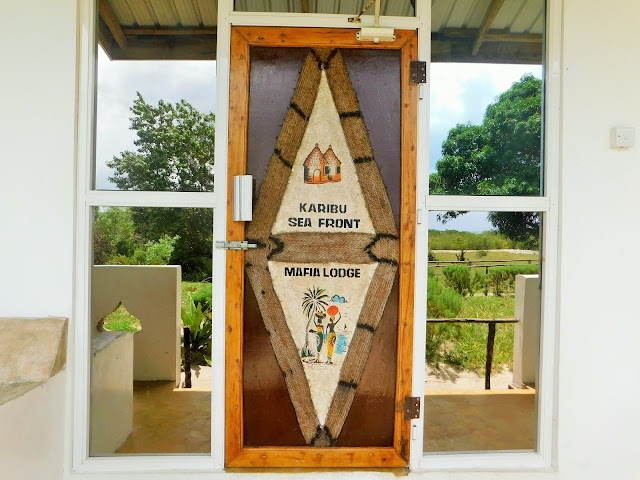 This place is budget friendly and basic. It has 3 rooms at the moment, more rooms are under construction. The rooms are clean and smell nice, the staff pay attention to that which was a treat. The mattress was good so I slept well. 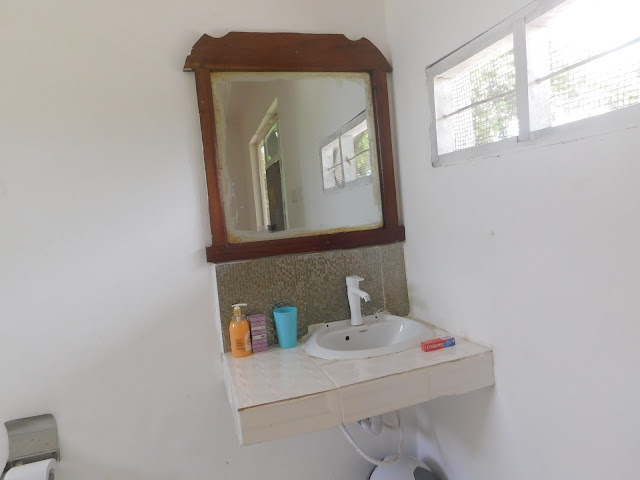 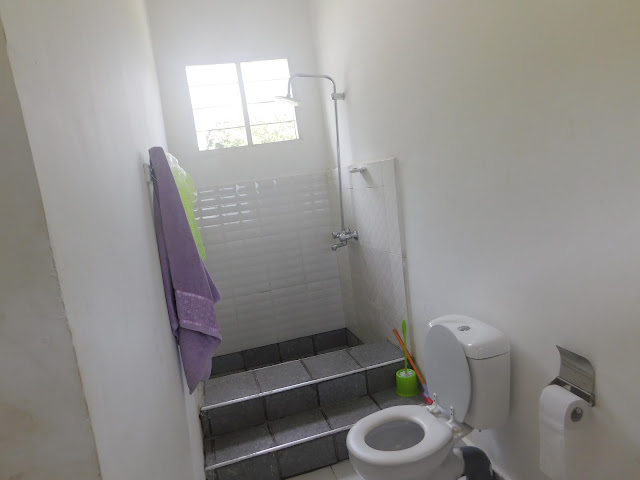 This lodge provides a quiet and relaxing place to stay. Staff are friendly but Abdulrahman, one of the staff, was brilliant through my stay. I got talking with him and by asking him questions, I found out a few things about Mafia and he was happy to serve as a guide.
Photos of the lodge: 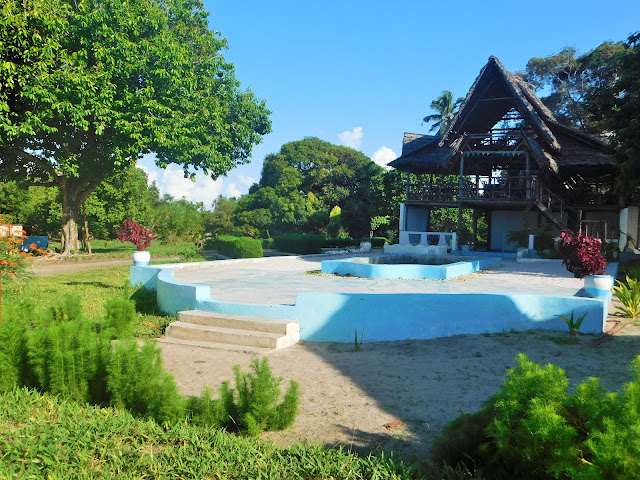 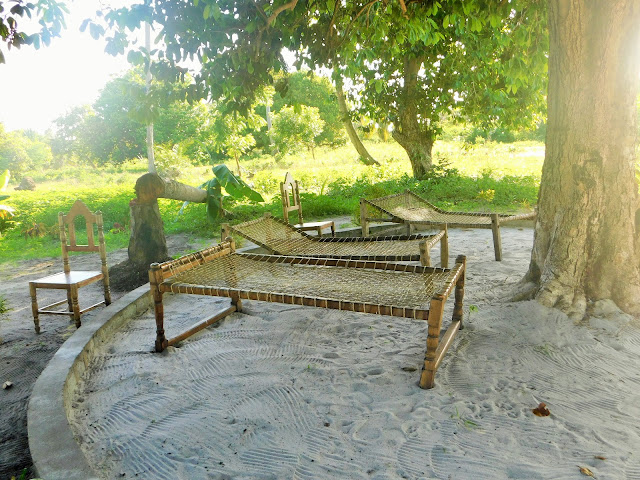 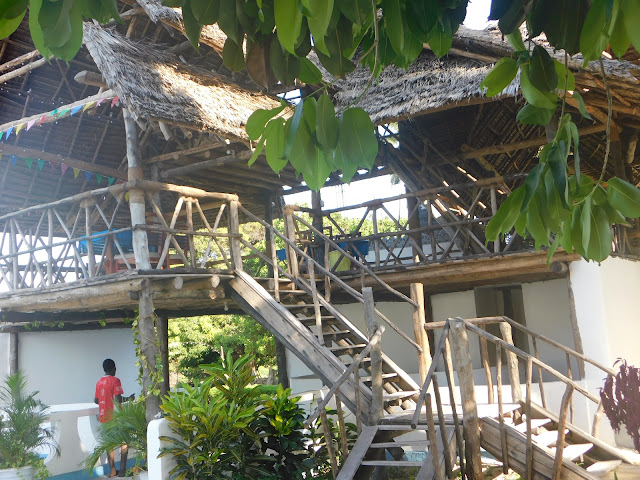 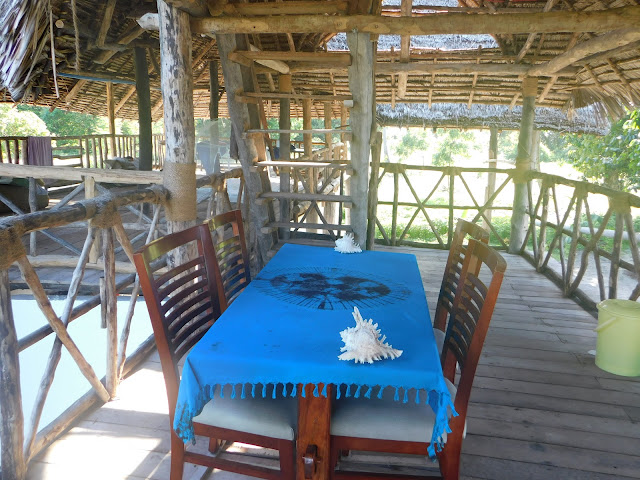 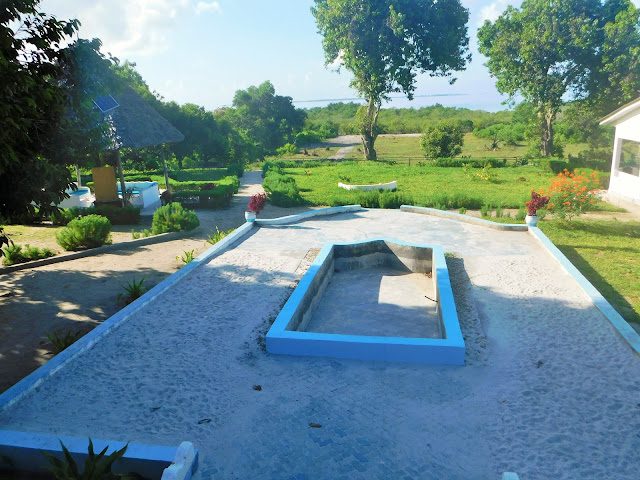 If you stay here, I recommend that you have your plans for what to do in Mafia. There isn't any recommendation from the hotel but if you let them know your plans, they will arrange things for you.
Although there are charging ports in the rooms, the only thing that works with them is the fan. To charge any devices, there is a common area where guests have to go to. Lights also go out at some point at night so be sure to go with your torch light. 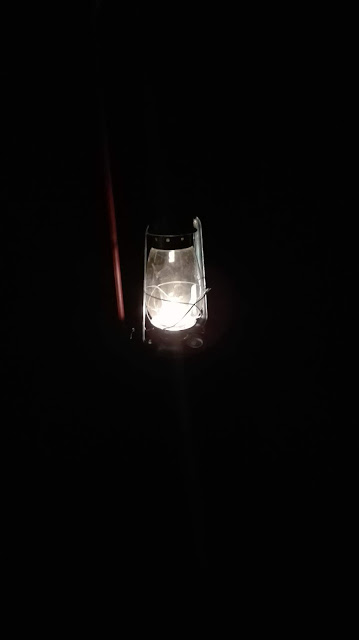 At night, the walkway is lit up with lanterns like this which I thought was a nice touch.

Weather - It was hot at the time I visited (December 28th to 31st). If you visit at that time, be sure to take light clothing. When it gets sunny, you sweat so much even if you shower.


Activities - As you drive into Mafia from the airport, there is the sign above 'home of whale sharks'. So obviously, the first thing to plan to do would be to swim with whale sharks. Snorkeling and diving are also top things to do.
I only went swimming with whale sharks. I didn't feel up to doing anything else so I was more of a beach bum.
Before we started, we were given a briefing,
- do not go too close. Their sight is not the best so they see only from 2 meters away
- avoid the tail, stay as far away from it so it does not swipe at you
- the sharks are not dangerous so they won't eat you. They don't have teeth
- jump in quickly when the guide says so for you to see them

To see the whale sharks, you have to put in the work. I wasn't adequately prepared. I really do not know what I was expecting, but it turned out to be a sport.
The guides would call out to everyone to get ready and tell you what side of the boat to move to then the ultimate call to jump would follow. The whale sharks move quite quickly so you may catch just a glimpse of them. If you are fast enough, you can swim along side.
When I jumped in the first time, water came right though my mask into my nose, that salt water, it was painful! I didn't see anything and took some time to recover. After two more attempts, I saw the whale sharks, two times. It was so cool.

I still had some incidents with the mas so I was giving up but the group I was with was great. One of the women tried to show me how to keep the mask on while the other even offered me hers. The guide finally found one that fit perfectly. Just as the get ready, wear your masks instruction came and I obeyed, the strap snapped. That was it for me.
I stayed on the boat to get a view from there and I was rewarded with this! 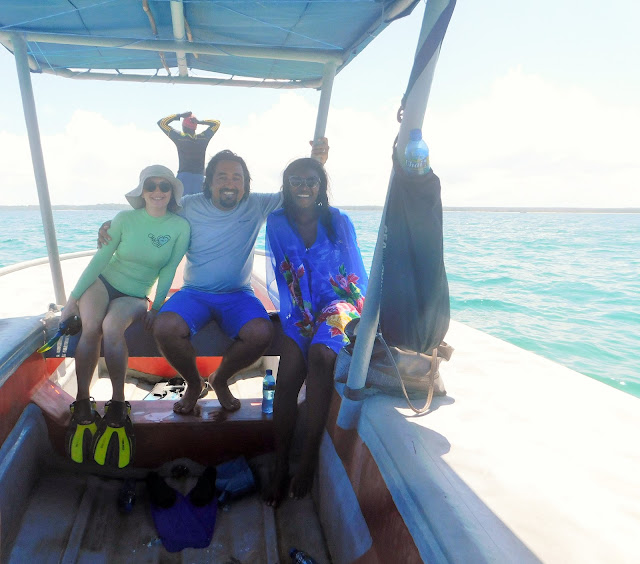 We left around 8am and before noon we were back to our lodges.

Food - Apart from breakfast, I had dinner once at the lodge where I stayed and it cost $15. On the two other days, I ate with the group I went swimming with at their own lodge - Meremeta lodge. The food there was good and I found the ambience welcoming. Meremeta lodge prepares dinner for all guests at the same time so all the guests have to dine together and get to know themselves. I thought that was a nice touch. I had lunch one day which cost $10 and dinner at $15. One of the evenings, I wandered into Utende village with Abdulrahman and it is really a village, reminded me of my own village. I went to the salon in the village to get my hair done. After swimming, my weavon itched so much that I had to take it off. The ladies at the salon convinced me to braid my hair, so I let them...I digress. I had mshkaki (roasted steak meat) which we would call suya in Nigeria, for dinner in the village.We certainly do it better in Nigeria 😆

Close to the lodge where I stayed, there was an area full of mangroves, it was beautiful to see. 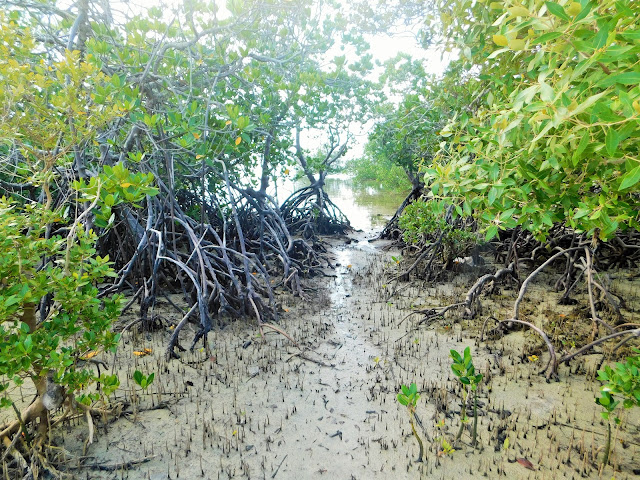 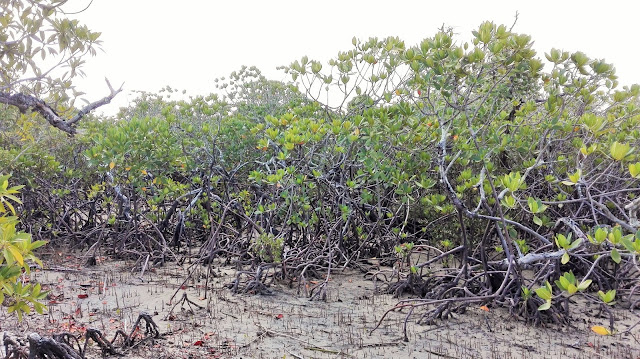 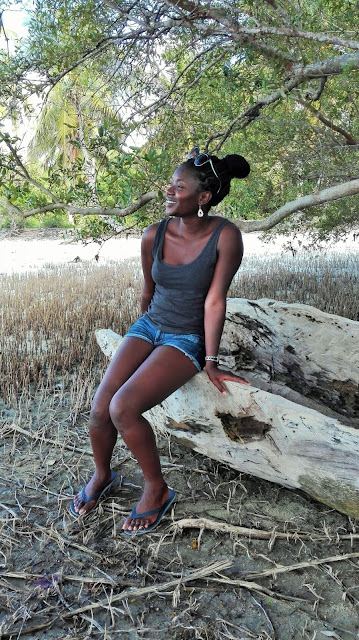 A few metres after the mangroves, there was an empty beach! 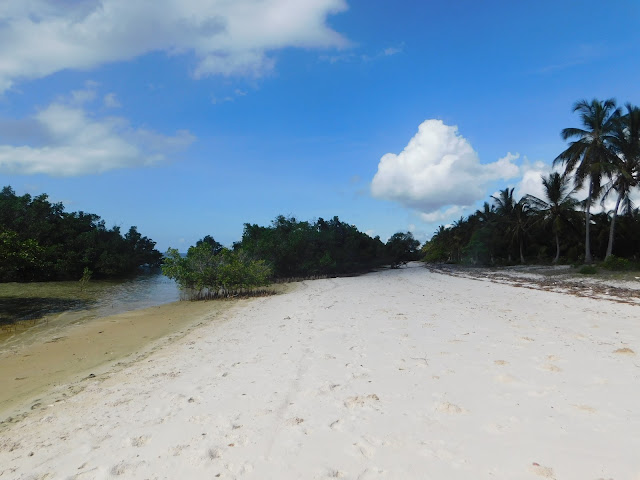 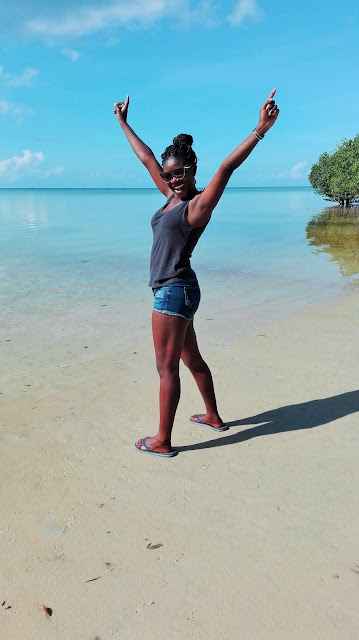 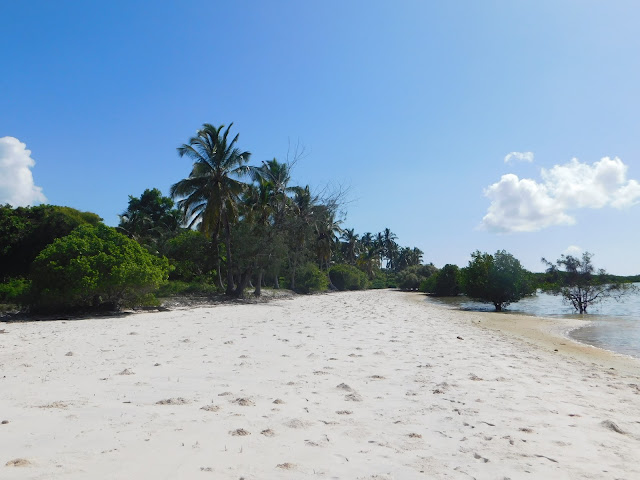 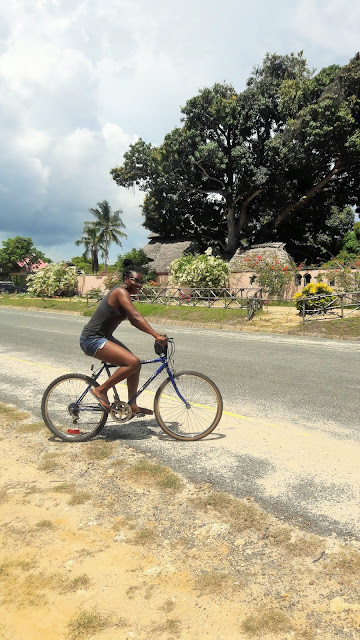 I wandered around and we saw a few abandoned/old boats so I had to pose with one. 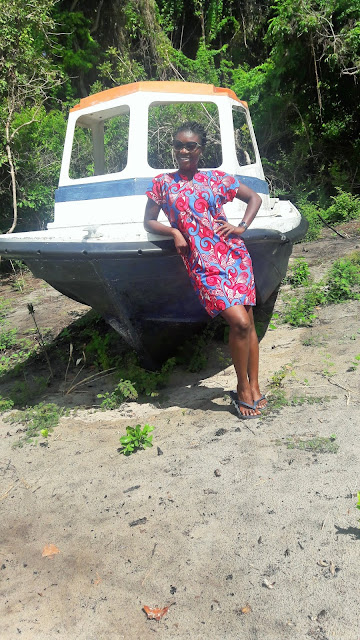 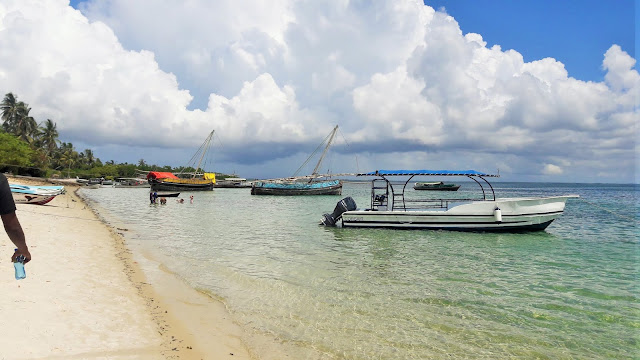 Mafia is less touristic compared to Zanzibar and beach boys do not bother people as much. 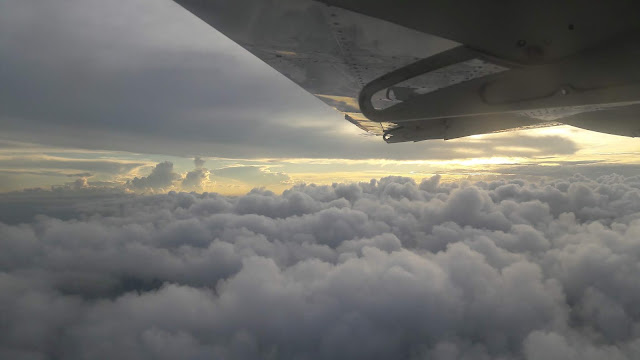 It was a short holiday but it was needed and a great way to recharge myself for 2019.