To a large extent, my parents are responsible for my love for art in many ways. We grew up with art works hanging all around our house. My parents have a collection and once upon a time when we complained that there were too many of them in the house, they found a way to buy us over.
This explains why when I saw this gallery on a friends story on Instagram, I asked my friends to meet up there. At the end of our visit, we were glad we stopped by.

Retro Africa is in a residential neighbourhood and in a part of Asokoro that doesn't seem to have much. Without the right address, you might wonder if it even exists but as you drive in, this photo below welcomes you. 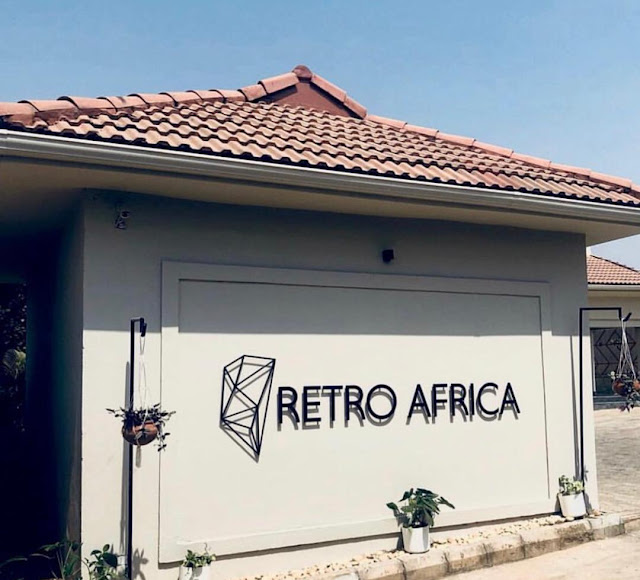 Just after that, the next thing you'll notice is the room full of butterflies. I was quite impressed with it. I can't think of how much time it must have taken Habeeb Andu to finish. At night, the lights settle nicely on the white walls and illuminate the place making one appreciate every piece in that room. 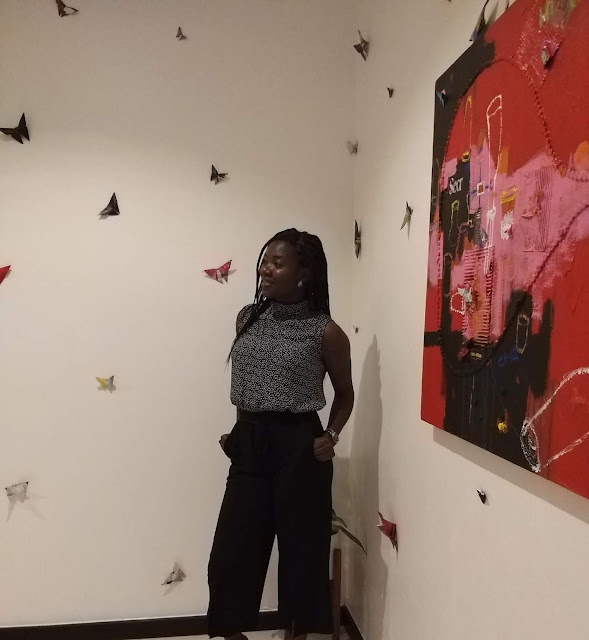 We were fortunate to have been welcomed by Chuks Okobi, the restaurant manager. Upon telling him that we wanted to see the gallery, he showed us round and was extremely patient to take as many photos as we wanted. There are two floors with art works, the ground floor and the first floor.
The ground floor has art works of emerging artists while the top floor has works of established artists such as Abdoulaye Konaté.

Retro Africa opened its doors to the public on January 26th 2019. Although they had been in existence, they only had pop up events that would last for a few days. The place is divided into three parts...the restaurant which is called the Pavillion, the hotel which is called Atelier and the Gallery.

Abdullahi Umar and Dolly Kola-Balogun are the co founders. I asked Abdullahi why they decided to get a base. He thought they would have a wider reach as one of the downsides to pop up exhibitions was that people would miss out, as the exhibitions lasted for a few days. With the gallery, people could always catch up. The current exhibition is called 'masters and contemporaries'. They reached out to the emerging artists as some of them had been part of the pop up exhibitions, other who weren't honoured the invitation and it worked out well between both parties.


Between floors, we were shown the hotel (Atelier), there are only four rooms. We saw 2, one goes for 70,000 naira and the other for 90,000 naira. They are both comfortable and a good number of items in the room were made in Nigeria. The bathroom is a good size with a nice shower head and plants to complement the natural side to things. The more expesive one has a living area in addition to the room.


You'll notice that I've left my thoughts on the art works out, intentionally. I would prefer for you to stop by and form your own opinion, I'm not trying to make anyone biased with what I think...although I gave a little away with the photo above :-)

The Pavillion has offers where on certain days, selected dishes have discounted rates. Thursdays are for games, we chose the right day to visit, what a coincidence. We also had a discount on some of the dishes we chose. The food was not bad but I generally like to go back at a different time to be sure that the food is indeed not bad. The first time, I just may have been lucky.

Somewhere on the side, there is a wide green space, a garden, that will be put to good use according to Abdullahi. The space will eventually used for events with music and peotry. They hope to invite artists for live performances.

An upcoming event to look out for will be a wine tasting event at the end of March. Tickets for this will be on sale soon.

This might be a new spot, but they sure have big plans for it. Do stop by when you have the chance. It is located at 12 Ukpabi Asika street in Asokoro.