Bumpiness all the way with this trip

If you missed this post From One Place to Another, please follow the link as that will help to put things in context :-)

We set out as early as 7am, we were going for a week. It was a rainy day and as we drove out of Bertoua, I was told that we would be driving on dirt/untarred roads for the rest of the trip. We finally took the turn that led onto the dirt road and gosh, nothing could have prepared me for that level of bumpiness. We drove through mud and deep pot holes, I gained a lot more respect for people who have jobs as drivers. The dexterity with which the car was handled, I would have come nothing close to it. I counted the hours, I tried to get my mind to wander but it just wouldn’t, every part of me was involved in the bumpy ride. My insides were turned over and over again, my body rocked back and forth violently as the road determined. We had a loo break in between and I jumped out of the car just not to feel constricted by it because I didn’t like the car very much at that point. See some photos which I managed to get when it wasn't so bumpy of the road below: 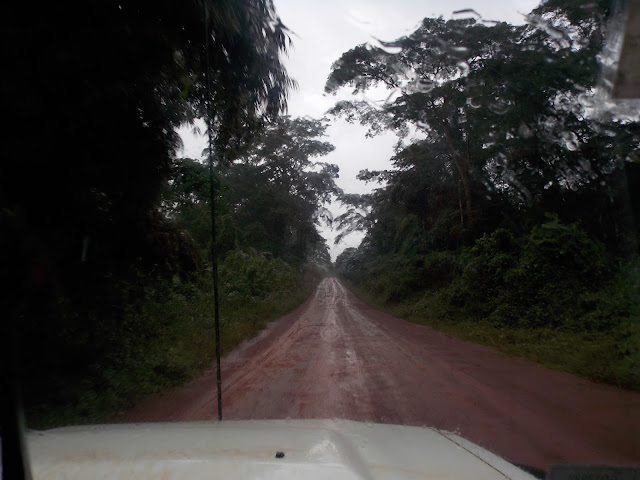 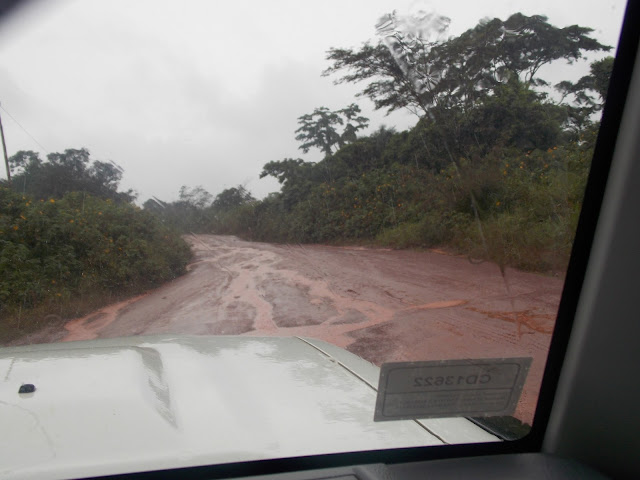 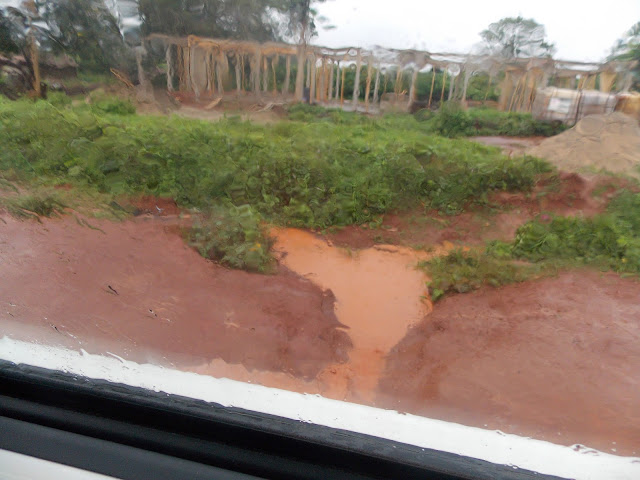 After about four hours of this, I started to feel woozy. I wondered whether it was because I hadn’t had anything to eat so I nibbled on carrots that I had chopped for the trip. On a general note, I do not eat before trips, especially road trips. Suddenly, everything seemed to rise to my mouth, then the saliva that starts to form just before throwing up came, I managed to tell the driver to park and I jumped out, I needed air! By this time, I was trembling. My colleague handed me lime but my fingers were so unsteady that I couldn’t peel it, she noticed and was so kind to peel it for me. I bit through and the sourness seemed to shock my system back to normalcy. All this must have happened within a space of ten minutes but those ten minutes were indeed long. We continued and I just sat there, my body being led by the car until we got to our destination.

When we eventually made it to our sleeping place, this was what the car looked like. 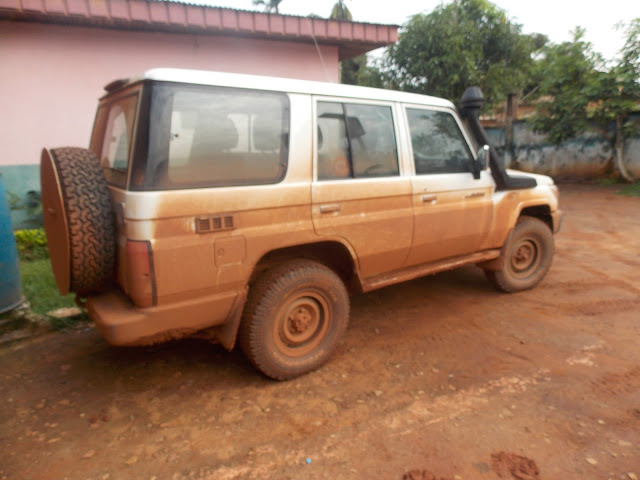 We went to get our things from the back of the car, and lo and behold, over half of my body cream had come out! It was so annoying. I had to clean up the two bags it stained, and I managed to save some. I was sure I locked the lid. Well, the bumpiness obviously over ruled and spun it around! I immediately asked for detergent and had to wash the bags.
This was the site that greeted me in my room! Not as bad as the last one, huh? I made myself comfortable. 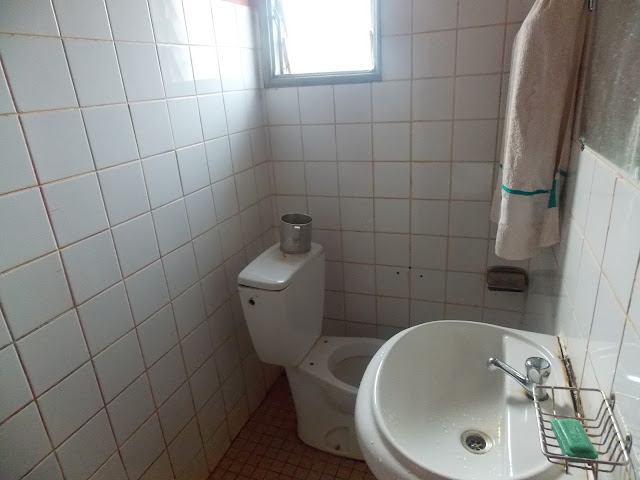 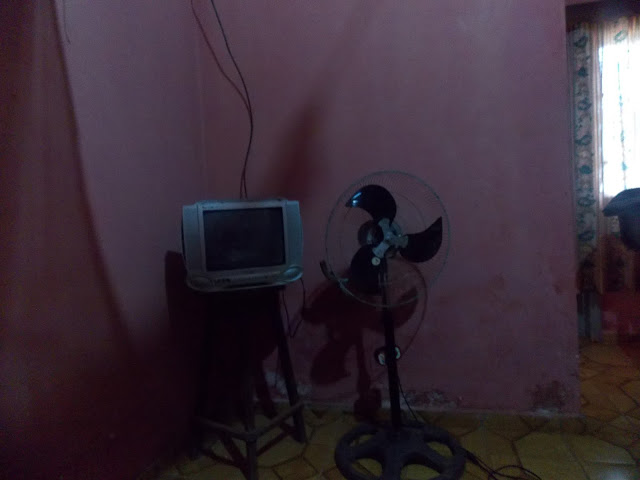 Of course I had my mini stash of food…


The next day, I walked through an internally displaced person’s (IDP) camp. This is not something I haven’t done before but for some reason, it was different. I think I have a whole new level of appreciation for certain things.


It was like a village, there were people cooking, there was a thick smell of firewood, there were people making their hair, there were goats, ducks, obviously owned by people in this camp. I saw two stalls with guys selling different items and chatting away, there were clothes washed and dried on straw. There were women bathing their children outside their huts/tents, men chatting away, some looking so sad and finally children playing. The sound of their laughter was priceless given the circumstances. Children have a way of touching anyone deeply! Then there was the hope in people’s eyes that made my heart stop, it was almost scary. Mothers giving me their children to hold like they were testing to see if there was any good left in humanity, asking their children to play with me like they wanted to see if I would play with them or not. They treated me like I was ‘important’, but I am just someone like them who is fortunate not to have lost everything; who might try, but might never understand the deep sense of loss and hopelessness they feel. People seemed to cope with the situation but there was a woman whose sadness was written all over her. She could not even smile, we tried to respond to her questions but how could we even imagine what she had been through? She was beautiful, but aged by sorrow, she didn’t sit with the other women, she isolated herself. I felt sorry for her but that would probably be all I could offer, empathy.


A certain woman gave me her baby, she was so comfortable with me carrying the baby, I found myself cooing to her. I wished she were mine at that moment, but that was wishful thinking right?! The baby will grow up to be a stunner! She is so pretty. 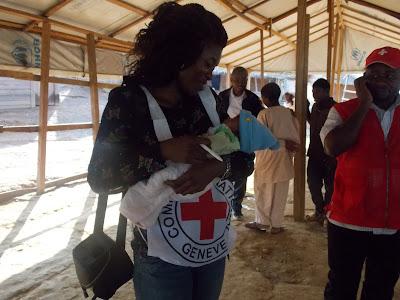 Just a little distance away, I saw a boy with the biggest tummy, he might have been suffering from kwashiorkor (I'm no expert but we tend to draw this conclusion pretty fast in Nigeria when children look like that), but that wasn’t all, there were marks… I remember seeing similar marks in the past, a friend was cut that way with a blade on his back, little marks, his grandmother was trying to cure him of his stubbornness at the time she did that to him. I know of another person whose baby her sisters wanted to cure of some sickness, he was cut in that way, she wasn't around, when she returned, she was heart broken. Well, I wondered if these marks were a representation of the child being cured of something too. He seemed happy and didn’t have a care in the world but there I was with my very active mind, asking as many questions as my mind could hold. A few meters away, there was a girl, with glowing brown and beautiful skin, she was in between dark and light skinned, she had such curly, long, but unkempt hair. She was naked, standing by a fence and playing alone with grass. Again, I was asking so many questions, questions I would never get answers to. There were other children smiling at me, some reaching out to touch or shake me, I bent and greeted them but the language barrier between us left me feeling helpless. I said the only word I knew meant something in Fulfude, 'sannu', it worked :-)

Back at the lodge, the receptionist was kind, he agreed to heat water for us so on one day, I had a hot bucket bath, ignore the brown water okay, having a hot bath was luxury I was super pleased to indulge in!
The walls seemed so thin, I could hear everything from the rooms next to me. One person snored so loudly. To me, the whole place could hear him. In my helplessness and my desire to get some rest I got up at some point to knock on his door. I hoped it was the angle he was lying on that made him snore. So maybe if he was woken up and turned over, he would stop or at least not snore so loudly. Of course, that didn’t wake him! It was silly of me to do and my colleague and I keep laughing each time we remember this act of mine.
The bed? Let’s not go there… One thing I was super thankful for was ear plugs! The person who came up with the idea is a genius!

My body ached, so I tried to ensure that I would stay in form, especially as the whole trip was a celebration of bumpiness, so I managed to do basic exercises that would help me stretch in the mornings. After the third day of course, I could not keep up with the early starts and rounds of travelling!

After two days, we headed to the next village, we left at 7am again, another six hours of bumpiness! We made it through the first three hours then I started to feel sick. I thought my body would have adapted but it was rebelling and I had absolutely no control of anything. The saliva started to gather but I fought it, pushing it back and willing my body to behave. A  truck was coming in front so we had to give way, right on cue, I took the glass down as fast as I could and the saliva came pouring. I got out of the car and moved over to a corner, this time I threw up. I was embarrassed, but the understanding look on the faces of my colleagues was comforting. She peeled lime for me again but this time, it seemed not to have any effect. I started laughing at some point and she looked at me askance. I simply explained that this had never happened before so I was unsure what to make of it all. Her response was simply ‘you won’t forget Cameroon in a hurry’. I sat there wishing I could go numb and just waited for the drive to be over. A lot of people have referred to me as a tough cookie, but in this case, I was far from that. I was more fragile than anyone else on this trip. I have never had motion sickness so I won’t call this that. I would prefer to say this nauseous feeling was as a result of all the bumpiness.


The most I had ever had of driving through bumpiness was about two hours or less, but six to seven hours, it was a first!


Through the bumpiness, I could not miss the forests we drove through…nature unspoiled and the beauty of lush green. I managed to get a few photos. We saw some monkeys. We were told that there were elephants but we weren’t so lucky, all we saw was elephant dump so that was proof of them being present. 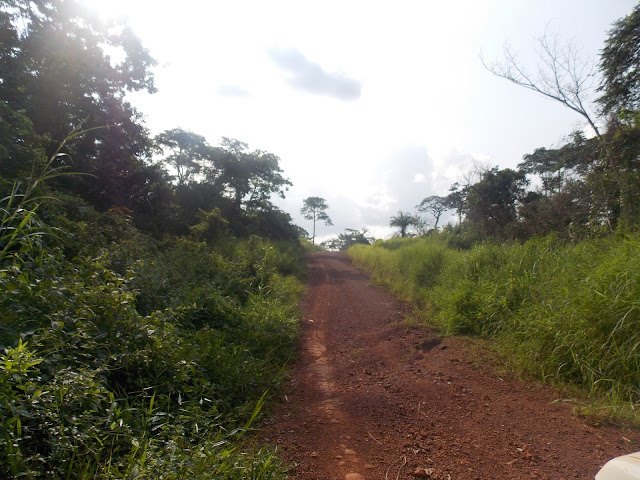 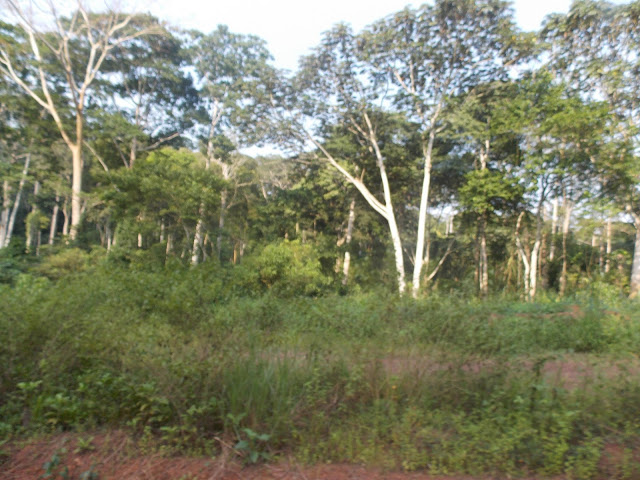 When we reached our destination, I reached for my laptop bag but it was wet, one of my colleague’s too. A few other things were wet then we noticed that one of our bottles of water got punctured. This time, my other bag was not only wet, but stained, again (same one I washed). Well, I had no intention of washing, so I dried it. We would be on the road again in no time and who knows what else could pour? I took out my laptop, then dried the bag. My laptop was untouched thanks to the plastic paper holders I always have underneath the laptop.