So it all started when I was thirteen years old and my parents had their usual fight, with my dad pummeling away as usual. The beating had obviously been going on since I was born but I only became aware of it when I was seven. We had just returned from London where we lived for about four years as my dad went for his PhD.

The first time I witnessed my dad beating my mum, it took me by surprise. As a child, I was feisty and bold. I hated that he was beating her and I made the ‘mistake’ of jumping in between them to try and stop him...I took a good beating! That's probably where all my problems with my father started. Every time they had a fight, as long as I was around I would jump in, yelling for him to stop and tell him that he was doing the wrong thing. I grew up telling my dad he was wrong most of the time and I got beaten for it, a lot. 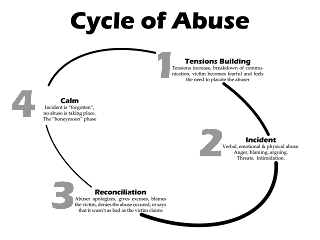 Years passed and I met several guys who did not have what was on my list. I was sexually abused twice by uncles and it made me wary of men in general. It also made me have a low self-esteem. At a point, I entertained the idea of becoming a lesbian just to avoid men coming my way. In fact, for a long time, I thought I was supposed to be a lesbian, but the desire was never followed through thanks to the prayers of my mother and a religious fear of God, hahahaha. I have always known a praying mother and sometimes I am assured that things will be okay because she is praying.

During my second year in the university, in 2003, I was minding my business, trying to find my feet in the world, and in university, then this guy came around. He is my dad's good friend’s nephew, and at the time apparently, he was wife shopping. He had been seeing a girl from Calabar and wanted to get married to her but his people kicked against it. They demanded that the girl he marries be from the same place as him and to be precise, from the Igala ethnic group. To make it easy for him, a few suggestions of good families with good daughters were made. My name came up and he pursued the option. I was a young, anti-man, angry girl with the keen desire to study men without being close to them. Ironically, most of my friends were male and I had very few female friends.

The first time he came around, I dismissed him. There was nothing overtly wrong with him. He was on his way up in the world and he was very handsome. My mother was clear about her desires, she wanted me to marry a good man and she personally had some misgivings about him, she was also quite worried that he was a soldier. Well, after much persuasion I decided to go out with him a few times. He was okay, but there was just one thing he dwelt on that put me off...every time we had conversations that touched on the roles of a man and a woman, he made it clear that the woman's place was in the kitchen. He laughed at me when I tried to talk to him about how important the woman’s place was in the family. He treated me like a child and it made me feel small… How was I even supposed to have a relationship with someone I could not relate with on the same level? From that outing, I knew I would never marry him and so I turned his advances down.

My father was furious, he went on and on about how I had missed a great thing and then proceeded to tell me never to bring a non Igala man for marriage to him. I was not bothered as marriage was the farthest thing on my mind. I honestly didn't think I would get married because I didn't think the man I had in my head existed. I simply told my dad that I didn't love the Igala military man. The look on his face was one I won’t forget! He looked incredulous and then he asked "WHAT HAS LOVE GOT TO DO WITH IT!!!!" That moment, I decided that if at all I decided to get married, my father would have no say in who I might choose eventually.