I found this church in the middle of a village, in the bush. A number of churches are run by Polish priests and nuns. I was talking to a priest who told me about some of his projects; one was construction of bridges to connect communities that had been cut off. He also talked of some mediation he was involved in for peace in communities. This conversation left me deep in thought afterwards. 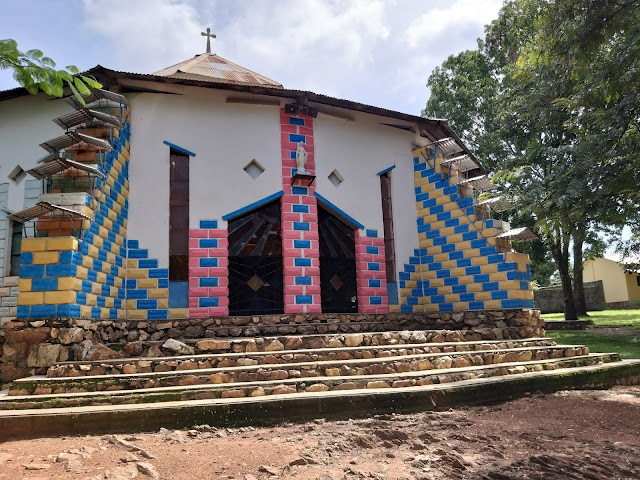 I heard of a Polish priest who was held hostage by an armed group and when he was to be released, he insisted that all the hostages (whose governments may not have done much to secure their release I'm afraid)  be released as well. That was successful.
The catholic church has a strong presence in Central African Republic (CAR) and the role it plays is quite impressive. This in my opinion should be what religious institutions should stand for.

The effects of war/conflict cannot be downplayed. CAR comes across a country that went from 10 to 0 in what seemed like an instant. The damage takes a very long time to repair and unfortunately, trust does not easily come back. There is a popular saying here "eat all you can while you can as you don't know if you might be on the run the next minute." I heard a few people joking about this but it is telling, that's how precarious the situation here is. There is no guarantee of peace from their experience, the security situation is volatile.

Different parts of the country are controlled by armed groups and I have heard comments from the locals saying that the president is the president of only the capital (Bangui). This always raises the question of the political will of the ruling class and their willingness to do what is necessary for the good at large.

The catholic church, Humanitarian organisations, and Non Govermental organisations have come in as "saviours" as the population here sees them, which should not be the case. Internal conflicts are fast becoming the cancer in different countries. Take Nigeria for instance, Boko Haram is an example and sadly has become one of the first things that comes to mind when people  think of the country. The road to recovery is usually painfully long and sometimes, past hurt may never be buried, rebuilding trust takes time.
I've only been here for four months so I am looking forward to seeing how things evolve.