Bumpiness all the way with this trip continued...


If you missed the first part, please read it here

This was what the room looked like. I find the best in every situation, so here, there was clean water. It wasn’t brown but clear and that was amazing to me, given the circumstances. There was no phone network in the two villages where we would be working, but there was constant light. I hardly used it but it was comforting to know. 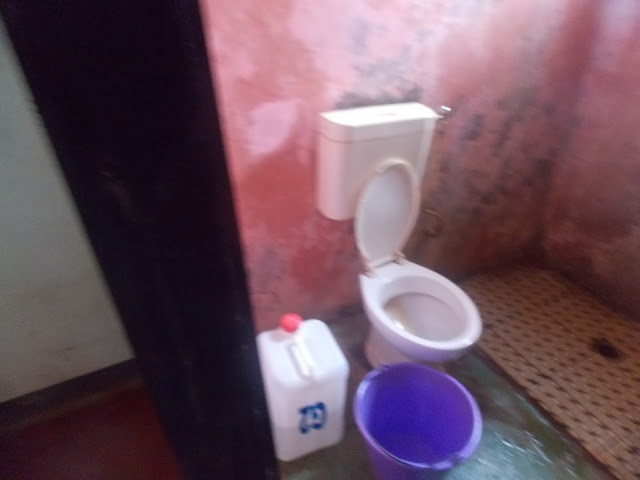 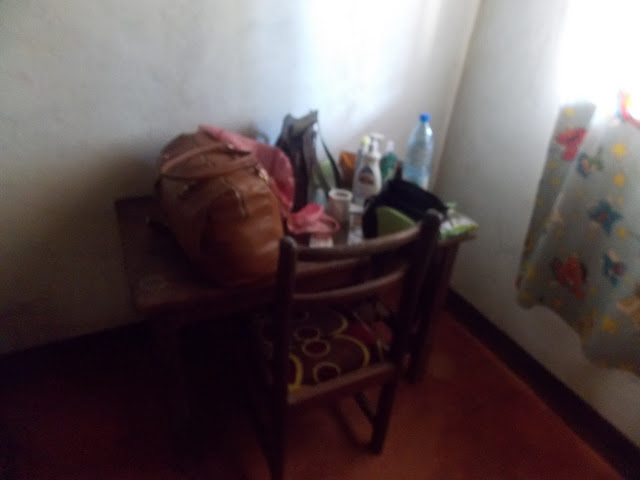 When we finally settled in and I was ready to have a bath, I checked for a container with which I could pour water over myself but there was none, I asked a colleague if she had one in her room, she said she didn't need one! I went to find someone at the reception but it was locked, I wandered around the premises, this was just as dark fell. I found the guy and asked. He told me that they don’t have any of those so I asked how I would have a bath and he said I would need to use my hands to scoop water out of the bucket. Without even thinking, I blurted ‘I can’t do that’. In response, he said he is unsure how to solve my problem. I stood, waiting, then he asked if I would mind if he cut a plastic bottle, I told him that would work perfectly well…

The place has the potential to be a really cozy place, if only some more thought would be put in. It has trees around the premises that provide shade, is nicely situated, and calm during the day. Sorry, didn't take any photos!
I was mistaken that it would be the same at night. The streets were almost deserted during the day that I wondered where the 15,000 inhabitants of the village were. I found out eventually that more happens at night. If you have any idea of how African francophone countries are, you will know about their love for partying ;) Every day, all night, there are usually people drinking and loud music playing, it’s just incredible. The night air was filled with loud music. Nigerian music and Nollywood have made the rounds everywhere in this country so far, that makes me proud :-) Although the music was good, I needed sleep to function properly. My bed, was the worst so far. I spent the night moving from one corner to the other. My ear plugs took care of some of the noise, partly, but this bed, no way. I woke up so many times to move from one side to the other, as every part of the bed I slept on took a dip.

From my sleep, I could hear myself wheezing lightly. I woke up at some point feeling slightly frustrated. I checked the time, and it was 3:45am. The nightie I was wearing was quite light, so I wore a thicker one. It was hot when I slept but by this time, it was a lot cooler.

A combination of cold baths and dust didn’t do very much good. I have been told that I might have a mild case of asthma by doctors which is yet to be proven, but I know to protect myself. I knew that if I started coughing, that would be the end of this trip for me! When I cough, it is quite unpleasant, heavy and chesty! The easiest places to have cold get into my body from, are my chest, my back and my feet. Odd right?! I don’t know how long I sat for, but I lay back at some point and exhaustion must have taken me.

By the time I woke up, it was 6am, so I prepared for work. I knew I had to have something hot to drink. Apart from water, I hadn’t had much else. At least the water in this village was clean, so it wouldn’t be so bad. We went to a shack for breakfast and I took lime with me to put in my tea. Although I ate, I didn’t have appetite for the food. I was almost feeling like I could live on water for the next few days. I wouldn’t call the places where we ate restaurants, they are more like shacks. These photos below are of one of the nice ones. 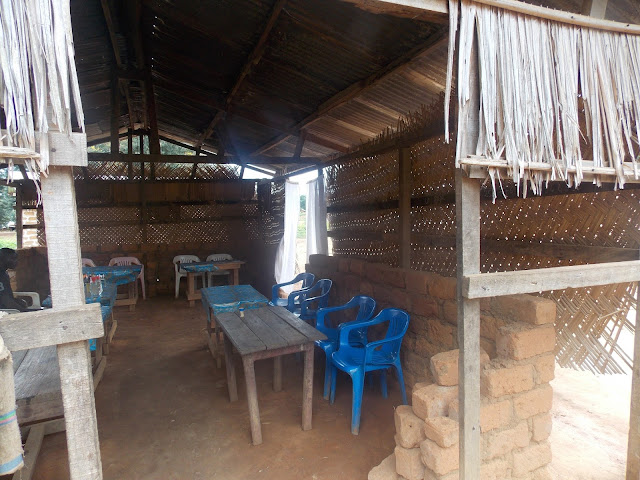 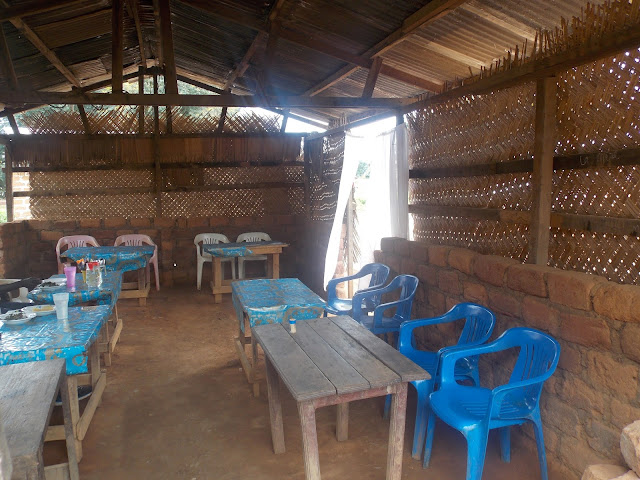 Many of them in this village are quite empty until evening, in fact, the streets are bereft of activity till evening time. I asked what the local dishes there were as I wanted to try them, but nobody seemed to have a reasonable answer. The best meal I had was porcupine in some sauce and boiled plantain. Otherwise, fish was always on the menu! Boiled and roasted. I had breakfast one morning when we weren't travelling, it was locally made baguette which I found delicious, accompanied by some brown beans I don't no know how it was prepared, but it was tasty. When we walked in, I saw a few people having it so when I was asked what I would eat and I said I wanted to try the beans, I asked what the smallest amount cost and I was told 100FCFA. I asked for that and was laughed at for taking so little, but it was totally worth the try. I loved it!
One of the things I noticed with food was that it came cold, but if you insisted for it to be heated, that was not taken very well. By now, my stash of biscuits, raisins and apples had gone down, but it was more than enough to take me for another two days at least.

The next day, we had a seven hour drive to the next village so I waited for my colleagues to finish with breakfast then we left. We had to work in a village in between so we broke the journey. I grabbed something to eat when my system had settled, we were there for about four hours before we continued.

At the next place, we stayed in a lodge that was on the major road. The loud music went on till at least midnight for the two days we were there. On the day we got there, I wanted some food, I was tired of grilled fish for dinner each day. We went to a place where I had macaroni, I had it with thin sliced beef in sauce, cold! At least it wasn't fish!
This was what the room looked like. 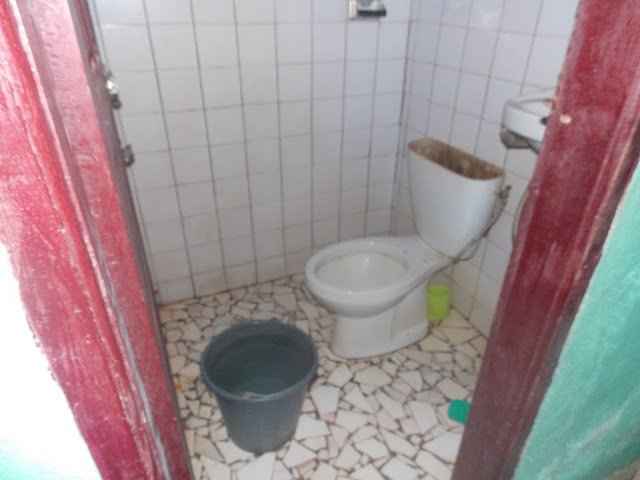 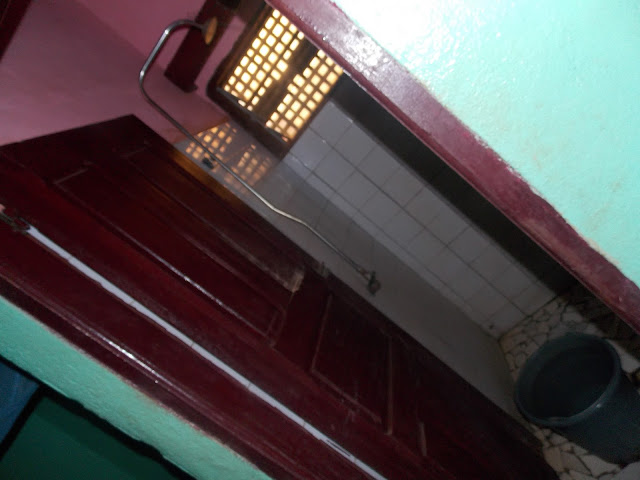 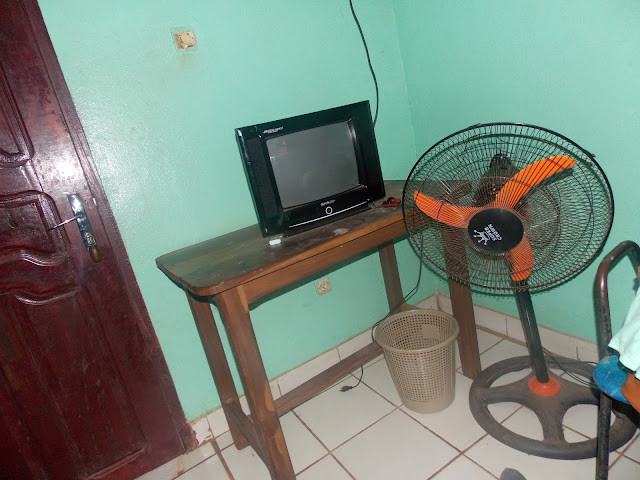 We went to another village but the road was not as bumpy so an hour and a half both ways making three hours was not so bad. By this night, we had finished and were all in celebratory mood. I decided to have a bottle of Smirnoff Ice. Anyone who knows me will know that I generally stay away from alcohol, It does nothing for me really. The last time I tasted alcohol was earlier this year when an Australian friend was certain that there was a particular wine he could get me to like. Well, I disappointed him, hahahahaa. Anyway, after my fish and this bottle, my head was spinning. I had an early bed.
Ear plugs to the rescue and by 9:20pm, I was lying in bed. I woke up at midnight with a headache but convinced myself that it would pass.
I went back to sleep but was woken up by something crawling on me. I am generally a light sleeper (my sisters keep teasing that I sleep like I am expecting a thief..hahahaha). Anyway, there was no light, did I mention that before? Generators were part of the noise around for the two days, back to Nigeria! In the darkness I threw off the sheet that was covering me and brushed around me to ensure that I got whatever might have been crawling, off of me. I groped in the darkness for my phone, used the torch to search, but of course I didn’t find anything. I sat on the bed, my head was still aching so I found my toilet bag and took some paracetamol. I thought about sitting through till the break of dawn but I remembered that I had a bumpy ride ahead and it might not have been a great idea with a headache. I checked what time it was and it was 4am. I went back to sleep, this seemed to be the best part of my sleep as I woke up feeling a lot better.

It was about a three hour drive home. And phew, the bumpiness was over!

These are the names of some of the villages/towns I have been to so far:


Through all this we have managed to squeeze in some moments for ourselves:

There are many more places to go to before I leave here. I would not trade these experiences for anything...
Posted by Ene Abah at 08:57:00