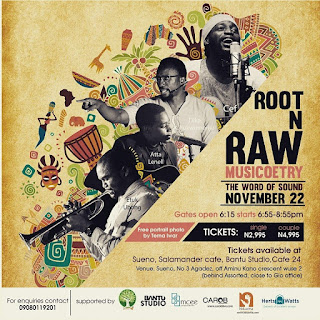 As I walked in, the first thing that jumped at me was the stage back drop. The material used looked like shredded cloth, almost like patches of cotton wool but it had a mix of bright colours, red, blue, white, yellow, orange...the light had some effects that might have made me see colours that were not there maybe, hahahahaaha. Someone welcomed us all at 7:20pm and the show started. 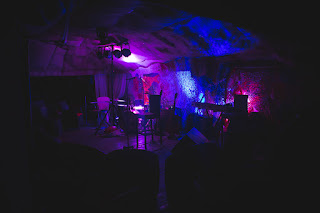 Atta Lennel started on the piano, he played a soft, soothing tune, 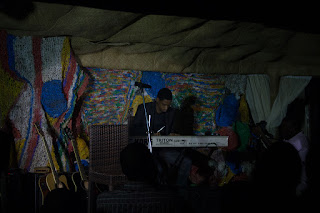 then went up to the microphone with his guitar in hand. The first song he performed, he called 'Head in the sand' - for me that was a song that needed trained ears to blend the singing with the sounds that came from the guitar. I was rather late to do so because just as I was starting to enjoy it, the song ended. 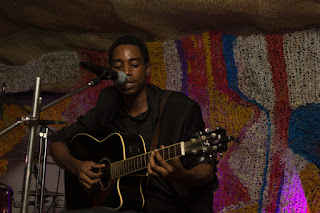 The next ones, breaking away, deep and one by one, didn't need experts, they were nice songs and I had heard him perform them before so they were somewhat familiar. Like I wrote after the first root n raw, Atta shows great mastery in what he does. He switches keys so easily with his voice and guitar and that I find quite impressive. 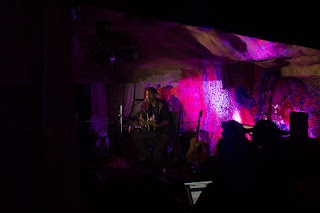 Next, the sound of Etuk Ubong's trumpet filled the air, I had to look around for where the sound was from. He gradually made his way to the stage. 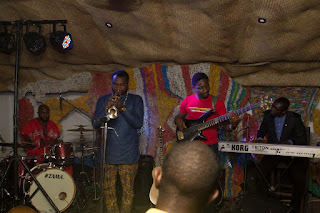 A guitarist, a pianist and a drummer joined him, he introduced them as Lennard - keyboard, MK (Michael) - drums and Michael Wonder on the bass guitar. The sounds came out in such unison, they entertained me. 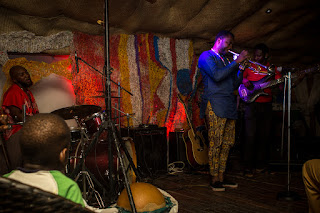 You could tell that each one of these guys knew their thing as they played easily. At the beginning of the second rendition the instruments produced a samba, beach harmony. The first was softer. Each player had time to show off how good he was, MK I found exceptional! His head followed the beats and he had a smile which said I love what I'm doing. His attitude added life to those drums. From time to time, Etuk would step aside and let each player take centre stage. I liked the display with various instruments.

You know those Igbo village scenes in Nigerian films? The way a flute sounding instrument (ocha in Igbo) is usually played to introduce the scene, that was Dike Chukwumerije's entrance. 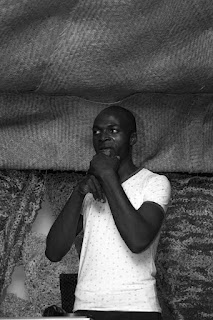 He was accompanied by a group of six men dressed in white playing the ocha (I heard the word from Dike BTW), gongs, a calabash with beads on it and one more instrument I am not sure what to call. 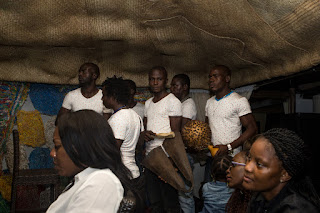 Dramatic right? It was kind of nice though. Dike took the microphone and spoke words of wisdom, throwing in Igbo words here and there. 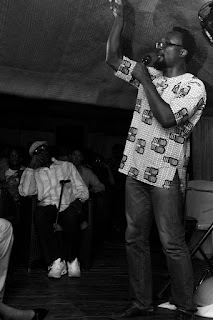 His words are always loaded and I am a huge fan. He made us laugh, think, wonder...He ended with a peom he wrote in honour of Chinua Achebe when he passed away. Words that evoked mixed emotions - power, death, culture, darkness, sorrow. As much as I did not understand the words in Igbo, I felt all these. He ended with a song and all this was his tribute to a legend. 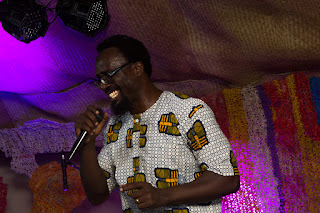 Cef in his usual exuberant way came up drumming on a water pot. 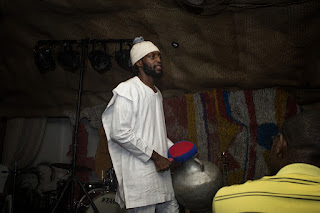 A little boy from the audience was quite entertained or would I say thrilled, so he joined Cef in front of us all, Cef obliged him as he refused to be led off the stage. 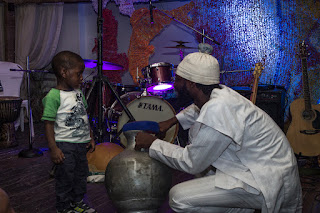 Cef likes to play with his voice in such an interesting way I find. He has a good stage presence which is usually accompanied by a broad smile that he flashes intermittently while performing but when he gets excited, the smile remains. 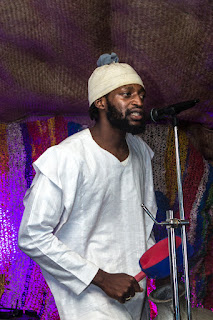 He also engages his audience, especially for those who know Nigeria well as he laces some songs with pidgin. 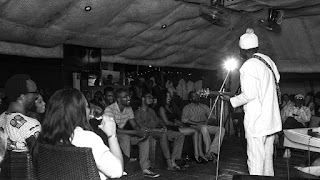 He also has great mastery of the guitar and his voices blends well with what he plays. There was a dance done which represented many things, different local dances in Nigeria -  Idoma dance, Tiv dance, Igala dance, Fulani dance, Igbo dance, contemporary dance, a tiny bit of ballet. My sister summed it up nicely by saying that if she were to use an element to describe the dance, it would be water. The lady's (Bukunmi) movements were fluid. While she danced, Cef drummed, another drummer joined him. 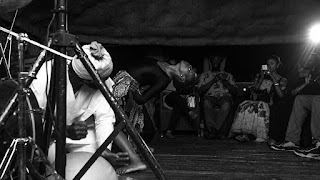 Cef went back to the microphone panting, you would wonder if he was the one who was dancing, hahahahaha. He said very few words about rhythm then went back to his guitar. Etuk and co joined him on stage, so did Atta, then Cef handed the guitar over to Atta while he sang then broke into a dance. 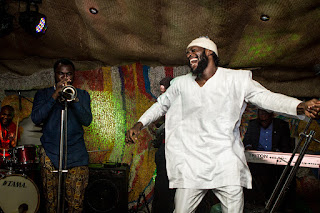 All the instruments had charged up the atmosphere...Bukunmi was back on stage, Cef's voice was so high and powerful, his smile, that smile didn't leave his face. He was taken over by his performance, his energy was reflected in his movement. Like Dike, Cef entertains, gets you to ponder. 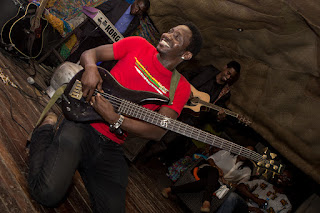 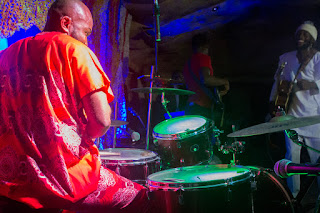 From the audience, I could see excitement, rapt attention and the instrumentalists were all over joyed. The last song Cef did was called MaryAnne, the beats were techno, jazzy and all sorts. The song talked more about not giving up on dreams than describing MaryAnne though :-) The performance went on... 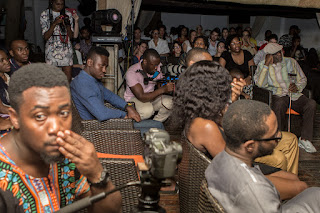 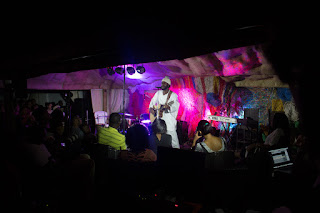 I asked Cef what the plan for Root n Raw is ...he hopes that shows will be done every quarter from next year so we'll just have to watch out.

Photo Credit: Bantu Studio (You can find them in area 11, on Ahmadu Bello Way, at the plaza opposite Unity house) .