It's a question of identity

I was travelling in Europe recently and in one of the countries where I was, my host asked me if I could speak "South African". Before that question, she had spoken extensively about how she was in love with Africa and how when she was younger, she used to perform African songs as she was in a band. She has never visited and hopes to someday. It might sound like a cliché but she spoke about Africa like it was a country.  I indulged her and listened, before I could answer, she went on anyway. She mentioned that she had never visited Africa but was keen to do so. The next question, I can't remember how exactly she framed it but it came across like Tanzania, South Africa and Botswana were all cities that were next to each other. At this point, I told her to give me a minute then I pulled up this map of Africa. 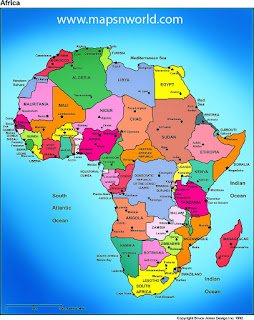 The first thing I said was South Africa is a country, I showed her where it is on the map then told her that the people are called South Africans and the language she probably was asking if I speak is Afrikaans. In her case, I expected her to have an idea as the language originated from a country just next to hers. For the location of the other countries, I showed her on the map that the countries were not the same and were far from each other. Looking at the map, she realised that Africa was bigger than she imagined and the countries are all in very different locations.

In another country I was visiting, I was hanging out with a few people and one was Nigerian, like me :-) I was asked the usual questions by one of the people; if I was on holiday or travelling for work, where I was coming from and where I was going to next. After answering these questions, the next thing the Nigerian chap wanted to talk about was visa processing and went on about how getting visas are usually difficult. I was going to visit four countries in total so in his words 'you must have suffered with the visa processing'. He said a few other things which I found embarrassing and I was uncomfortable with the whole conversation. I can understand that visa processing for certain countries could be tedious, but wanting to make this a full blown conversation with a group of people who were not visa officers, I didn't think it was ideal. They seemed uncomfortable also and I wondered what process he might have followed to get his visa as he lives in that country but I was not about to ask. I managed to change the subject and we had the conversation alone afterwards!