All about my Sky Diving Experience


I always knew that I wanted to go sky diving but I was unsure of when I would do it and where. Sometime in July 2012, I had a trip planned to Tampa, Florida and as the time drew closer I called my friend who was going to host me to let her know my plan. She immediately got on it and sure enough there were places, but she found a super amazing deal with Jump Florida Skydiving. Skydives were going for half the price! Payments were made and my dive was booked, but we were notified that it would be dependent on the weather.

On the appointed day, while we were on our way, the weather seemed slightly off and we were called to let us know that the weather was not so great, so there could be a delay or the worst (cancellation) might happen. I didn’t like the sound of the latter. It was about an hour’s drive from where my friend lived. It was far out as there had to be enough space for an air strip. We went on anyway.
When we got there, the first thing I had to do was paper work. One of the things I had to sign was a disclaimer stating that if anything went wrong, they would not be held liable. It made me think really hard so I proceeded to ask a few questions about safety, their equipment and how to use the parachute. I was given a mini tutorial and told certain things I would need to do and how my instructor would communicate with me in the air, then I signed the papers. I had come that far and would not allow fear to stop me. I got strapped with my kit and off we went. 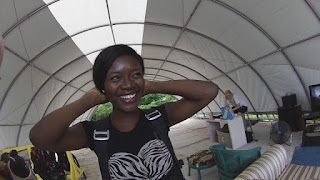 We got onto the plane, a small plane that contained 5 of us. The pilot and 4 passengers. Two instructors and two divers who were both going to try for the first time, so we were only going to dive from about 11,000 - 14,000 feet (Adrenalin). There were higher heights; 15,000 feet (Ultimate) and 18,000 feet (Extreme). But on this day, I was only going to try adrenaline! My instructor sat directly opposite me on the plane and kept the mood intact about the upcoming adventure. 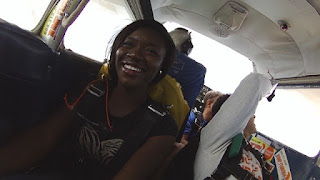 As we approached the desired height, he went to my back and strapped himself onto my kit. I almost changed my mind especially after watching the other two drop out of the plane but at this point, he wasn’t asking. He was moving to the exit and I think I heard myself try to ask him to wait but off we went, he pushed us out of the plane and that was our free fall. 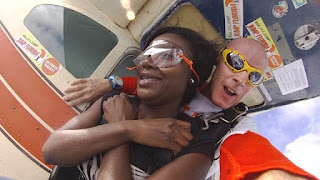 The force of the wind was immense, I was terrified! My skin felt like elastic, the wind stretched it so much, I felt like my upper lip did a back flip and was upside down (I have a picture to prove this but won't be sharing, hahaha). Apparently, the instructor knew how to position his face not to be tossed around by the wind so much, but I was new to this. 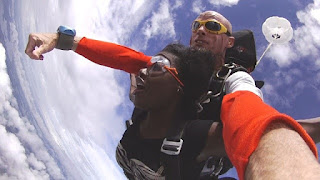 I finally started to get comfortable after the initial fear and relaxed into it. I could see the world beneath me, or so it felt. I screamed so much, at first out of fear then eventually out of excitement. 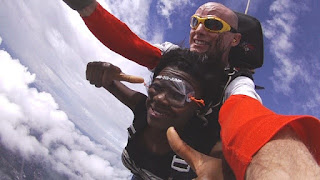 The adrenaline rush, the wind, it was all intense but it was good, just what I anticipated. 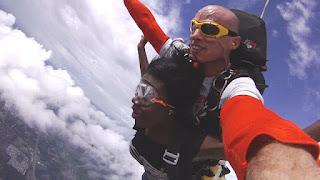 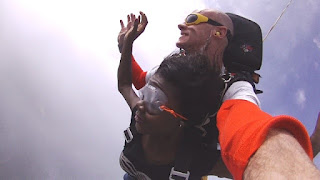 And the parachute was finally let out. 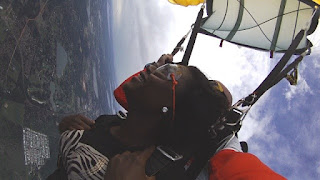 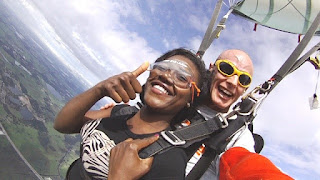 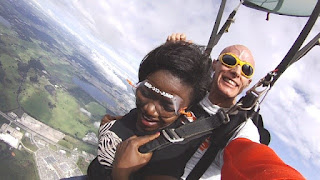 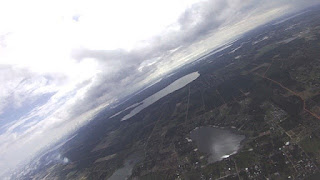 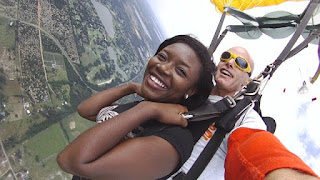 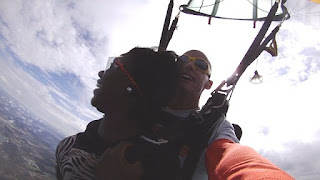 I landed quite well, standing on my feet, I didn’t fall which happens to many I heard. But I was dizzy, I staggered, then had to stop to collect myself for a moment.
The instructor asked if I would do it again and I said “no, one time only”. It was one of those things I knew that I would do to guage how I felt about it. After doing it, I'm happy to move onto something else. I had no point to prove by going again anyway. I think I loved the slow descent with the parachute most. The free fall with the adrenalin pumping, the wind, the sheer intensity, it took getting used to. Bungee jumping was something I was considering but after this, I think it has been crossed out of my list. It is a long free fall and from sky diving, I got the idea of it so it was in a two in one for me. Even though this is one of the craziest things I have done so far, I enjoyed it a lot. It was something I had to do and I have no regrets whatsoever :-)