Ill treatment by the Nigerian Police


So my sister, Odachi Abah was featured earlier this week on this post. But yesterday,  08.10.2014, she got asaulted by a Police woman in Lagos.

I was having lunch with a friend when a picture came into my phone. I screamed and my friend with whom I was having lunch kept asking what the matter was. I simply showed her the picture, she became so filled with rage. It was a picture from my sister with a caption: ‘ I was assaulted by a Police woman this afternoon’. It didn’t look good! I tried to speak to her but she could not talk, she was at the Police station, the unit where the woman in question works. She went to file a complaint.

Eventually Odachi wrote her account of the assault below:

"On the 8th of October 2014 I got assaulted by a Police Woman. This is what happened.

On my way home after my NYSC clearance from Oshodi-Isolo LGA, Lagos State, Nigeria, with a friend, Maduka Benson, our vehicle (Maduka was driving) entered a hole which pulled part of the car bumper out. The Police woman controlling traffic kept shouting at us so my friend driving was trying to tell her that our bumper had pulled out, but she insisted that he moves away from there. A gentle man asked my friend not to drive or the entire bumper would pull off the car. He crossed to the other side and helped us fix the bumper so we could move on.

The police woman walked towards the window where I was sitting and said out loud in broken English “SEE AS YOU FAT LIKE MUMU FULL THE MOTOR” My friend and I came down from the car asking the woman what he had done wrong to be insulted in that manner. She kept shouting and raising hell. I walked towards her (in my NYSC uniform) to explain but surprisingly she pushed me back, pulled out her weapon (a baton) and hit me on my face three times. The first one hit my glasses off my face while the other hits landed on the side of my face which resulted to injuries and me bleeding. We searched for the Police woman until I clearly heard her colleagues telling her to run and hide. The Police woman took their advice so she ran away. Other Police women suddenly surfaced at the scene and one of them started calling my friend an armed robber for no reason. (Such things could be done to divert attention and rage to the actual victim). We asked them which station they worked with, but they refused to tell us. My friend decided to block the entire road causing traffic just to get the name of the station and the Police woman. Finally, it worked because one of the female Police officers told him that they are from Makinde Police station, Mafoluku, Oshodi, Lagos state, Nigeria. 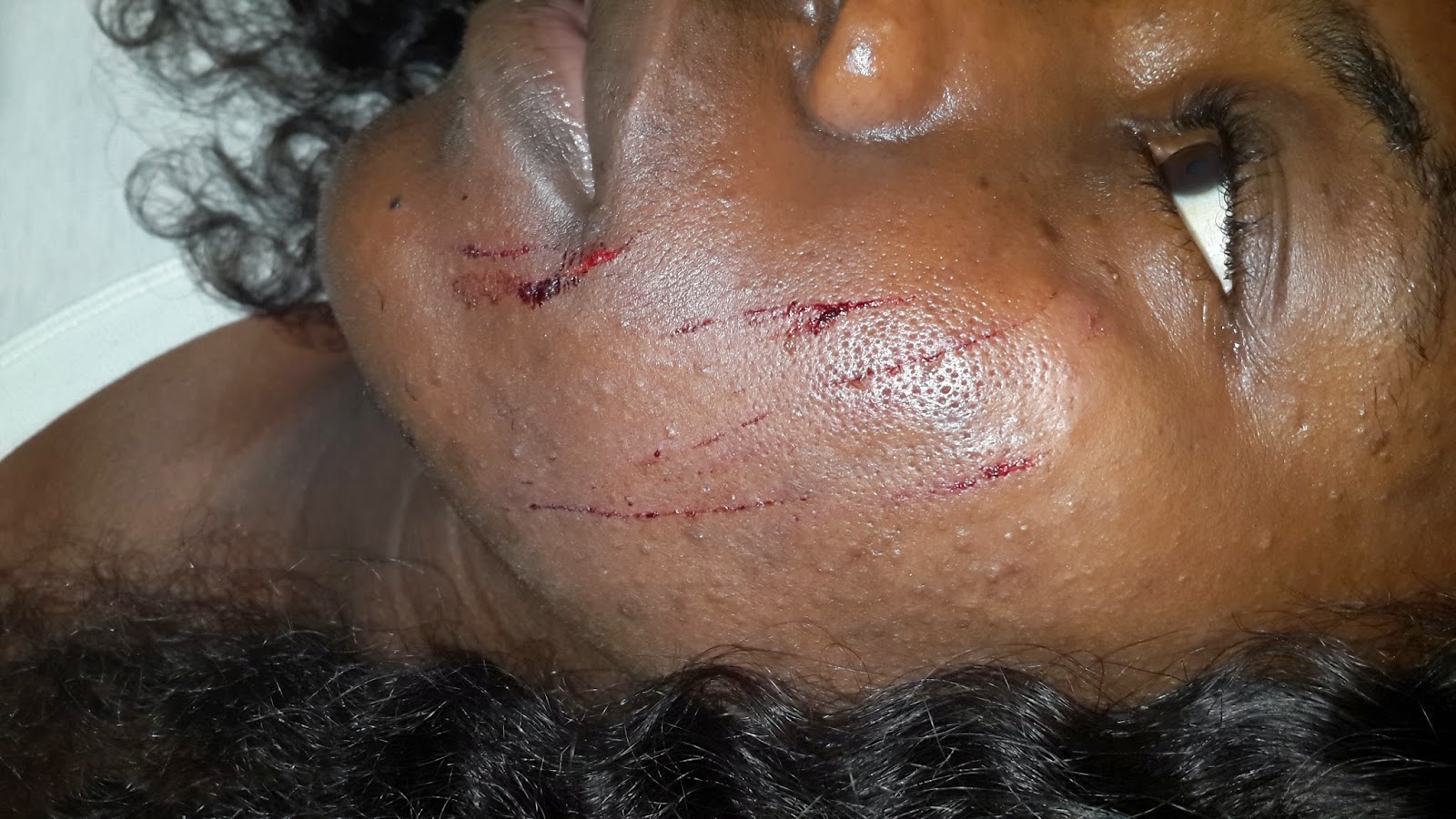 Few minutes later a Police Hilux vehicle arrived at the scene, the officers asked me to get into my car so we could go to Makinde Police station.  A Police man sat at the back seat in our car while the other officers  remained in their Hilux vehicle driving in front of us to the station. When we got to the station my friend asked for the station officer (S.O), we were told that he wasn’t around. My friend and I were trying to explain to two Police women we met at the station. Suddenly one of them started telling my friend to keep his voice down, saying this incident should be kept a secret . He got very angry and with a raised voice was asking what type of secret she  was talking about.

One of the Police men who came to the scene where I was assaulted walked towards us and informed us that his boss would like to see us in her office so we went to her office. She called the Police woman that assaulted me over the phone and also called another Police man by the name of David to investigate the matter. She wanted to listen to our part of the story while we waited for the two Police officers, David and Justina, to arrive. My friend and I explained everything to her in detail. The Police man, David, entered the office finally with the woman who assaulted me. Their superior whose name or rank I cannot remember asked her what happened then Justina started her narration which was filled with so many lies. She said that  my friend and I beat her up and also said we took her Police cap and removed buttons off her uniform. The Police woman who assaulted me called Justina was dressed in a red t-shirt and black leggings which made her superior ask her why she was dressed that way.
After Justina’s narration, her superior knew she was lying so she ordered David to put Justina in a Police cell. Afterwards, we followed David to his office to write our statements. He read our statements then took us back to his superior’s office. His superior kept begging us to please forgive Justina and said they will call us via our provided phone numbers when they need us. We agreed and left the station to take proper legal action because she may have been doing this and getting away with it or may do it again."

Now I am unable to reconcile the fact that a Police officer who is meant to serve and protect would do a thing like this. Amnesty International recently released a report titled Welcome to Hell Fire detailing acts of torture and other forms of ill treatment in Nigeria. Please download here if you have not read it. “Amnesty International’s research has found that countless other more people have suffered, and continue to suffer, similar torture and other cruel, inhuman or degrading treatment (hereinafter ill-treatment) at the hands of the Nigerian security forces, including the police and military.” Sometimes we hear of such incidents but we are unable to put a name or face to who it may be happening to, as we may not know the victims in question. But this brought it home, it was my younger sister who was serving her country in a state where no family member resides.

It angered most people that this happened while she was wearing her National Youth Service Corps (NYSC) uniform. She was just from the NYSC office where she went to do her monthly clearance. If the NYSC uniform which used to be so respected, has become so disrespected that a corps member would be treated that way, where is the hope for anyone? Justina has disrespected her country and what her uniform as a Police officer.

I have seen videos of how badly security agents are treated when they undergo training, so I wonder if this was her way of dishing out what she may have suffered. But, why would anybody be so frustrated or angry to do such a thing? My questions may sound naïve but I’d rather ask them. From the many comments on twitter, BBM and other means yesterday, Odachi is not the first one to suffer something like this and she will not be the last if nothing is done. This may be one isolated case, but I choose to raise my voice against such inhumane treatment by an officer. She may have done this countless times and got away with it. Her colleagues asking her to run was indeed the height of irresponsibility on the part of these people serving Nigeria!

Justina may be one bad egg, but I do not doubt that there are many like her doing the same thing as I heard different stories from people who have had their own experiences with the Police. I also gathered from comments that Makinde Police station is a particularly notorious one, so God knows the horror they may put people through.

One comment that stood out to me last night came from a friend of ours, we had heard similar comments but didn't pay as much attention as we did to his comment. He obviously has had many experiences with the Nigerian Police. In summary he said, I know you have the right to follow this up but my advice would be to let it go and leave it to God because nothing ever comes out of cases with the Police.

Such a sense of helplessness, and that is what many of us feel which is sad and wrong. The popular saying in Nigeria of  'the Police is your friend' in no way applies. The Police is more of an enemy which should not be.
Well, we would like justice to be served to Justina. Other officers need to know that it is not right to use a weapon on anybody except it is called for, they need to learn to act more responsibly.

So if you reading this post have had similar experiences with the Police or security agents, please do not let it go, take the case up. Or else, we will soon have our security forces killing us one by one with absolutely no consequences.