Can we get past this?

I think I have just the right person for you. You are smart and beautiful, I wonder why no one has taken you off the market yet.

Boma was on Vee's case, they had been friends for a long time and she had been married for 15 years, a feat they were currently celebrating. Vee was beautiful and successful but this part of her life had been on a standstill for as long as Boma could remember. Vee was a loyal friend, as she stood there attending to guests, Boma could not help but be grateful for this friend of hers. The anniversary party turned out to be much more fun than they anticipated.

By the end of the day when they all settled down, the ladies did the usual, analysing different scenarios and laughing at some. It was always fun for them. All of a sudden, with a matter of fact look on Boma's face, I meant what I said earlier today she said to Vee. I do know someone I think you might like. Vee was not opposed to being set up, so asked for all the details. 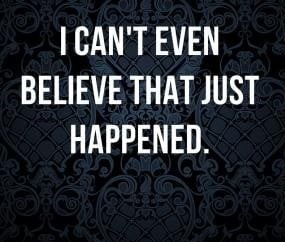 Boma had met him at a work event, he seemed cool, she wouldn't say more. She told Vee categorically that she was giving the dude her number. When Boma got like this, Vee knew there was normally no point trying to reason with her. Boma always gets her way.

He called a few times, nothing struck Vee but she was not going to kill what she had not even given a chance. She agreed to meet with him. On the day of the meeting, she asked to meet at an eatery that was big and always busy. She put her phone on silent and sat facing the entrance. This time, she was determined not to waste her time with anyone that did not seem to make an effort with his appearance. She was reminded of the last person with which she was set up, he made her skin crawl. He had body odour and looked like personal hygiene was not his biggest cup of tea. In the name of wanting to get married, she was not willing to sacrifice her sanity on the altar of fitting in.

She was starting to get impatient as 20 minutes had passed. She called and he said he was close. She gave it another 10 minutes then called to inform him that she was leaving. Just as she got into her car and was about to drive off, he called to say he was outside. She could see the person outside and wondered…he had a travel bag slung over his shoulder and was holding a bottle of coke. Intrigued, she got out of the car and as they were both on the phone, they knew. She walked up to him and asked how he was. He barely looked into her face, he seemed timid. They could hardly have a conversation, the guy seemed troubled. Just as she was about to get lost in her thoughts, he offered her his bottle of coke. She politely declined and asked if everything was okay. His only response was that he had walked to get here. She didn’t want to make him any more uncomfortable, but this meeting was clearly not working so she told him she had to leave. As Vee drove off, she was perplexed, having one of those ‘what just happened’ moments. She decided not to talk about it to Boma just yet. Boma already had a lot on her plate with planning their anniversary trip.

When Boma returned three weeks later, there was something about her. Vee could not place her finger on it, so on their second meeting, she asked. It was like Boma had been waiting for the question. I feel trapped she blurted; I’ve been married for so long that I feel like I missed out on growing up. We are 37, but I’ve been married for 15 years. I see you do certain things and I envy you. I love my husband and I love my children, but I want more. On some days, it seems that my husband and I are out of sync, he is comfortable with our life but I want some kind of adventure. You have the life anyone would want Vee replied, stunned. She assumed it was a rough patch in their marriage that would pass and being the unmarried one, she decided to give Boma the space she needed. She was not willing to hear the usual quip of her being unmarried so she would not understand. It was convenient that in two weeks, work would take her away for three months so she would check on Boma but the distance would be good for Vee. She was not ready to deal with married people drama.

It had been two weeks since Vee returned and there was a reception coming up, so she was excited, she had missed social gatherings while she was away, she had plans to let loose this evening. She was also going to see Boma who she had missed. She was hoping Boma would be in better spirits compared to the last time she saw her.

Boma was indeed in high spirits like Vee and they were having a great time catching up until Vee spotted Ralph. He looked different, cleaned up with a cigarette in hand. What is he doing here she immediately asked. We didn’t have the time for me to tell you what happened during our last meeting.

I have a lot I would like to tell you Vee…Boma motioned for them to go out. I asked for a divorce and I started seeing Ralph. You only just celebrated your 15th wedding anniversary. Why were you trying to set me up with Ralph if you had feelings for him? Vee had no way of predicting this turn of events. Before Boma could even respond, Vee went to grab her bag and made to leave, she heard her name in the distance as she was leaving, certainly coming from Boma. But she knew that their friendship would never be the same, if at all it would even survive this incident.