I flew into Oakland, it is a small airport, although bigger and better functioning than the Abuja airport...I digress! Getting through was super fast especially as things are automated, the immigration process was DIY on a machine, then you get stamped in by an officer. He only asked how long I was staying for, then I was on my way. From the minute I landed to getting through, it probably took 20 minutes as the queue was not long. I picked up my luggage, then got on the Bart (metro) to meet my friend, Manuela, somewhere close to the Embacadero station.

We spent the night then headed off to the National Parks the next day. I wrote about that in my previous post. After we got back, I had 3 more days before my departure and I made good use of them.

We got back to San Francisco on a Saturday. On Sunday, there was an Opera show at golden gate park organised by San Francisco Opera, and it was free of charge. Everyone seemed pleased to be out in the sun. A few of Manuela's friends joined us and it was generally a relaxing day. 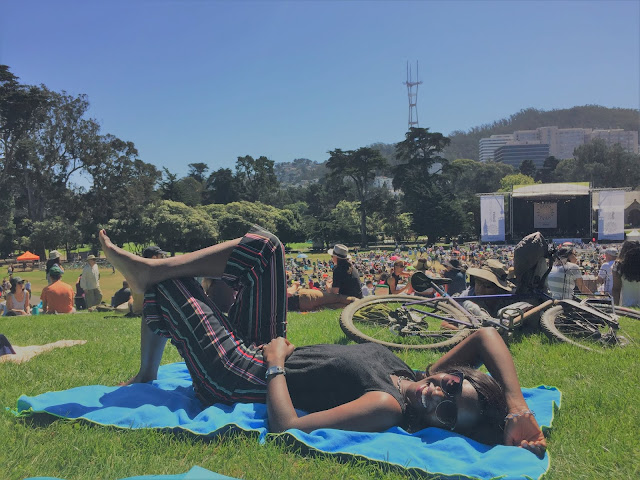 There is a lot to see and do in San Francisco, it all depends on one’s interests. We wandered downtown, eating my way through but visiting different neighbourhoods and walking by some places worth seeing. The golden gate bridge however is something you should see.


I liked the bay bridge, I thought it was beautiful, but it does not have as much attention. I hear it lights up at night so is even more beautiful then.
Manuela suggested that the best way to see the Golden gate bridge would be to go on bicycles, I saw why eventually. With a car, parking would have been a major issue. We jumped on bicycles and off we went. Our trail was an 11km ride. I have ridden bicycles for as long as I can remember, little did I know that bicycle riding was on another level here. Bicycles have gears and methods to brake application which I was totally unaware of! San Francisco is hilly so this is information you cannot do without.
About 15 minutes into our ride, Manuela and I were going down a slope and I heard her voice but could not make out what she was saying. I was tugging on my brakes little by little. Those brakes were so sharp! There was no bicycle lane on this street so we were riding on the same lane as cars. There was this truck behind me and it seemed to be coming pretty close, I looked back at it for a moment and tried to hold the brakes but I freaked out and tugged too hard on them and on the wrong ones. I pulled at the brakes for the front tyre so I felt the bicycle behind me leave the ground and my feet went off the pedals. I was trying to steady myself and jump off but I had the bicycle between my legs so somehow I saw myself moving forward and next thing, I was on the ground.


As I landed on the ground, all that was in on my mind was the truck behind me, the speed with which I got off the road shocked me. This fall must have been so dramatic, but I kept saying to myself that my family would be so mad at me if I died this way. My work did not kill me, then I would die from a bicycle fall in San Francisco? It was not going to happen! The truck parked and the two men got out to find out if I was ok. A woman in her driveway was also asking if I was fine. Manuela heard me scream when I fell and stopped. The men from the truck kept speaking about me using the wrong brakes, I didn’t get what they were saying until one of them described how he watched the back tyre go off the road. That was when Manuela explained that I was meant to use the right brakes and not the left. The right were for constant use while the left only complement the right + that was for the front tyre. On a slope, that was a No No as it would easily tip the bicycle over. I didn’t realise how badly bruised I was as my trousers were intact. Upon checking, we decided to go to a pharmacy so I could get it cleaned and dressed.

The ride continued afterwards to the golden gate bridge. The bridge was so busy and clearly driving there would have been a bad idea. 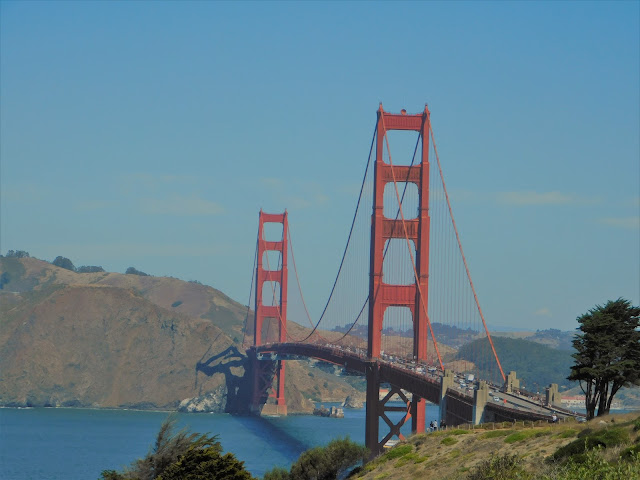 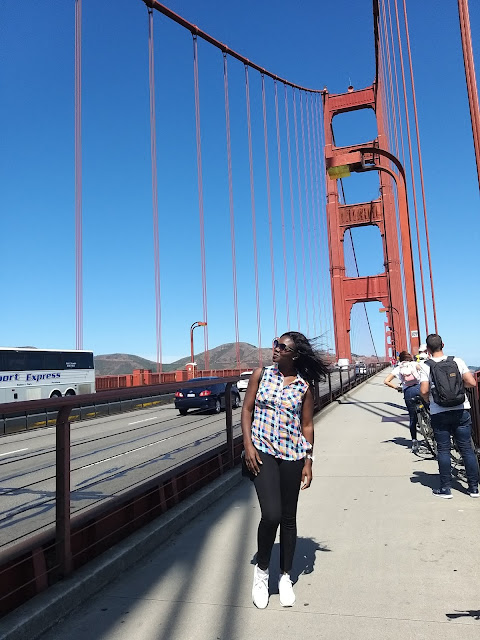 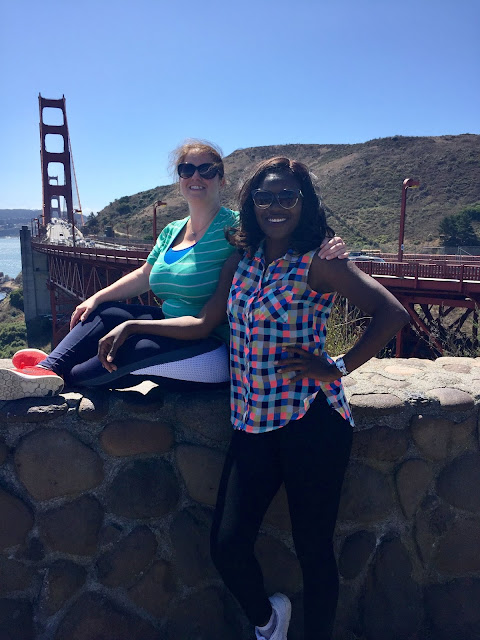 We rode on from the bridge to a posh neighbourhood called Sausalito. This place is an ideal place to retire to and spend all the money you've made! It is quite laid back.
We took the ferry back to San Francisco.  On our way, we passed by Alcatraz...that was initially on my list but I decided I would go there some other time.

We went around an old Latin neighbourhood in San Francisco 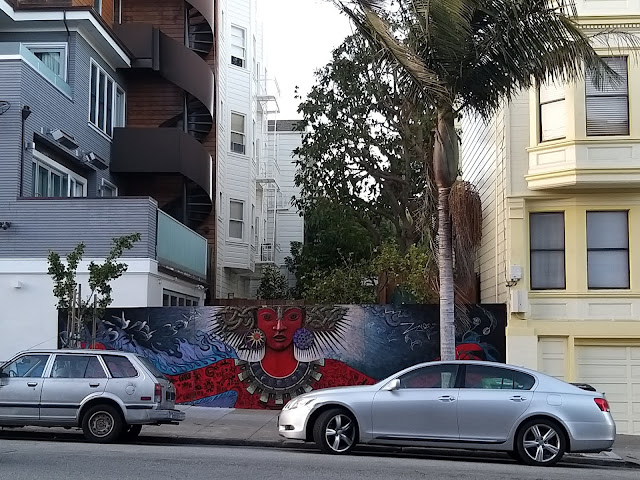 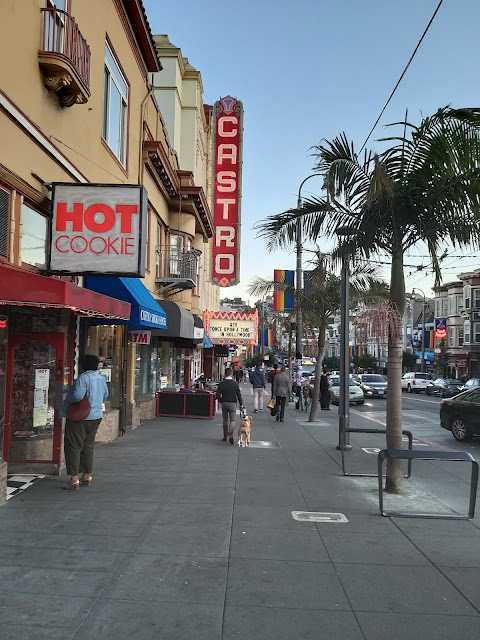 Of course I ate my way through my holiday


I indulge my sweet tooth way too much :-)

San Francisco has a lot going for it, but something that stood out to me is the epidemic of homeless people. It gets uncomfortable in some parts of downtown when you walk through.This was the biggest shock for me.
Manuela did not warn me before she took me through a part of downtown called Tenderloin. It is probably the most dangerous part in SF, Apart from the number of homeless people everywhere, there seems to be an issue of drug use that isn't hidden. I saw someone using a tube, the kind of things you see in films. I was most uncomfortable every minute of being there, a feeling I am yet to experience when I walk on the streets of Bouar in Central African Republic where I currently live.

One of the things I can say from all this is, the United States certainly deserves a trophy for how much they are able to keep their mess under wraps. A whole lot is going on in different parts of the country. There is a stark division between social classes and in this country, people can very quickly end up on the streets.

The city of San Francisco I would say is one of many contrasts. Oh, I almost forgot, people tend to expect you to be gay. Although I saw gay people everywhere, I hadn't given it any thought until someone asked Manuela and I how we 'hooked up'! I sure had a great time there, all thanks to Manuela.