From One Place to Another


I woke up in a confused state, I was panicking, but my panic lasted for probably two minutes. I had no recollection of where I was, so I lay still, trying to remember. This is the fourth bed I have slept in in seven days… 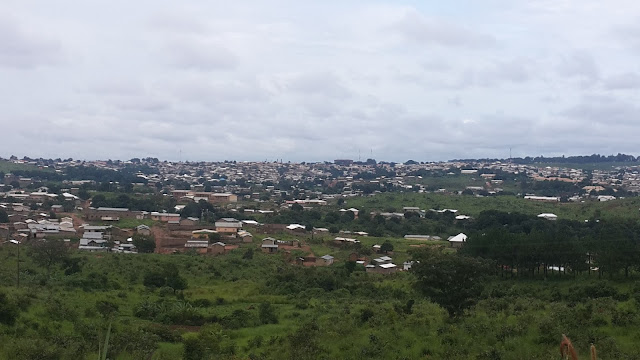 I have been working in Eastern Cameroon since the end of June. There are a few border towns that have seen an influx of people from Central African Republic due to the conflicts that have been ongoing. Not to mention the other parts of the country that share borders with other countries dealing with various conflicts! There is a full blown humanitarian crisis and there are needs at different levels that have to be met.
During my last field trip, we drove into a place and I was unsure of what it was. It looked like a residence, but I figured that the owner might have built more rooms, then opened it to the public. The rooms were so small, then I opened the door that led to the bathroom. The bathroom was narrow, I would probably not be able to stretch my hands out if I stood in there. We asked for the toilets and were led outside, the lady pointed at two structures, shared toilets. I walked back to the car and waited for my colleagues to finish deliberating then I asked if there was another place.
We got to the only other place in the village but the set up was not so different. Only this time, there was a toilet in the middle of the bathroom! My colleague must have felt sorry for me because he kept asking if I was okay. I assured him that I was, it was absolutely no fault of his that these places were the way they were. If I had ever called any hotel where we stayed before basic, this, I had no idea what classification to give. 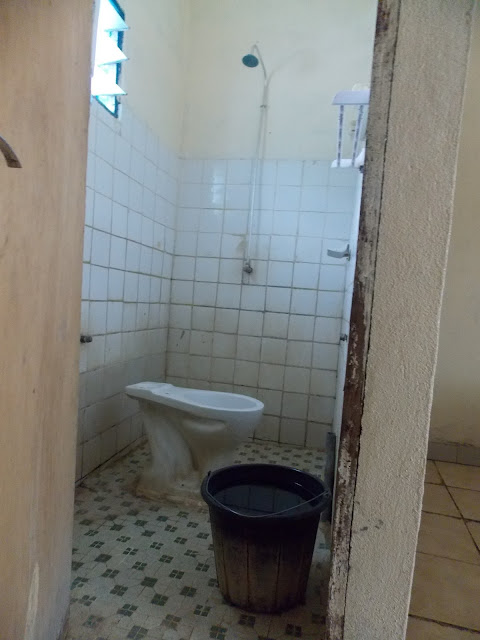 We were in this village for a night, so spending the most part of the day out of the lodge worked perfectly well. I spent a good part of the night moving from one part of the matrass to the other as it dipped once I lay on it. Eventually, I ended up on the edge, just on top of the wood. The bathroom however, almost sent me into panic mode each time I thought about it so I just didn’t. I didn’t use it, I patiently waited to get to the next town to have a bath. I deliberately drank little water and did not eat any food to avoid any need for the toilet. I ate two apples and biscuits and I was absolutely fine.

After a long and exhausting journey, we went to eat. When we returned to the hotel, I walked to the reception with a smile, said hello to the receptionist who looked on like he was not there. I said my room number then he looked me in the face and asked if that was my room. I responded in the affirmative but he kept looking suspiciously at me so we stared right into each others eyes. Some silent communication took place and I’m not sure what he took away, but for me, I was saying that I did not have the strength to argue. Finally he conceded and went to get the key. He asked one more time if it was my room and I said yes, but he didn’t bring the key to me, instead he dropped it on the counter, a few steps away from where I stood. I walked to him to get it, all the while looking straight into his eyes. I wondered whether my being alone was a problem. Not so long ago, I checked in with colleagues, both male, I wasn’t asked any questions. I wondered whether I did not look as womanly as he might have thought that women should look. I was briefed that this was a conservative place where of course I would expect that it would be male dominated so I dressed to suit the occasion and this time I even had a veil over my head out of respect, but no, it was not enough. He finally said “I wasn’t the one who checked you in so I have to ask”. I was already walking away but I turned around and said “I know”, hoping that must have made him/his ego bigger!

I walked to the room with only one thing on my mind, sleep. The room had a damp smell but I did not have the strength to go back down two floors to request that my room be changed. After struggling with the windows which I did not manage to open, I settled for leaving the door to the balcony open to allow some air in. Next, I put my things in place, then pulled up the covers and the sheets felt slightly wet! I thought I didn’t feel right, so I walked to the bathroom but the towels were also not dry. I came back to feel the sheets once more and the two sets covering the bed were the same. That made sense, that was where the damp smell was from. I had no choice but to go back to the reception. The phone that should have saved me that journey was nicely tucked away in the wardrobe. 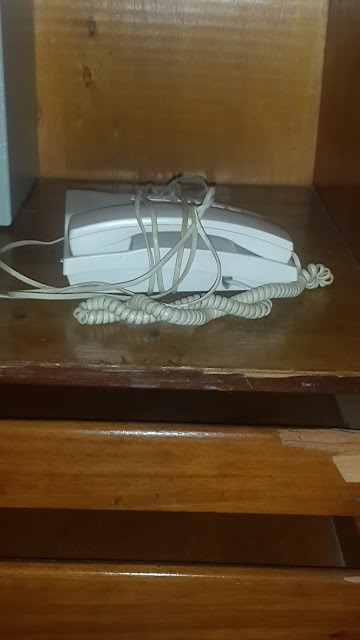 I mentioned to the young man (another one) at the reception that my sheets were not dry. He looked back down at what he was doing then said “oh that’s the same thing in some rooms as it rained today”. I was so stunned by his response that I had to take it in before responding. I asked him if he was saying to me that it was okay that the sheets were not dry. He mentioned that he didn’t say so, but the best he could do would be to ask me to wait for his colleague who had stepped out as there was nothing he could do about it. I sat at the reception for maybe five minutes reminding myself that this was one of the best hotels in town. Between having a certain man want to sit beside me and have a conversation, and some other one speak so loudly just outside, I could have sworn he was drunk, the realisation that this was a battle I would not win dawned on me, so I walked back to the room to find a solution. There were two duvets on top of the sheets so I spread the red one over the bed sheets, at least it kept the cold from the damp sheets at bay, and the blue one served as my cover. 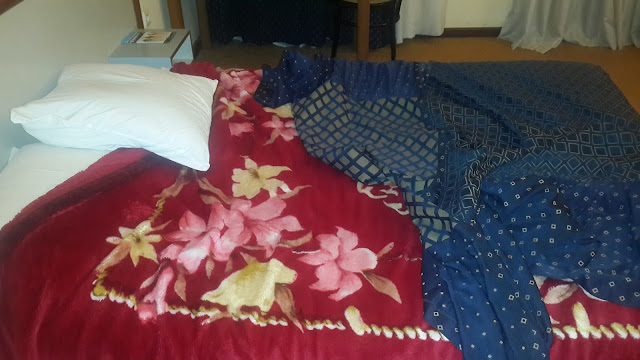 Guess what! The matrass was good so I had a good night’s sleep, and oh, the towels were clean too! I did not intend to catch a cold from the chilly wind or the damp bed. I was in this town to work not to fall ill. This however was no comparison to the other experience and I wondered whether my reaction to this might have been different if we went to the village first.

There have been more misses than hits with the places we have stayed in, but the shocking part at this supposed top ranking hotel was the indifference with which the staff responded. I have had to constantly remind myself not to expect different. Many times I travel to places that are quite remote for work in the humanitarian domain so expecting to stay in luxurious hotels would be rather farfetched. But I still am shocked at certain things. I know that they might not know better but the manner in which the messages are passed by the staff sometimes, make it a harder pill to swallow. The least I would expect from anyone working in hospitality would be courtesy. However, in comparison to the beneficiaries of our actions, this is bliss. I think about how in one instant they lost everything and how I might be if I were in their shoes so I go to bed each time with a smile knowing that my ‘plight’ is all in the bid to make someone’s life better, it makes all these experiences worth it. I hardly get stressed over these but I always think to myself that there must be a solution and try to find a way around.

I thought about my family quite a bit while I was in the field, I imagined my mother being very proud of how I have handled things, then I imagined my father being equally proud and giving me that knowing smile, as work in the field is nothing new to him, especially in rural areas. He would understand every bit of each tale, and warned me anyway that I would see the other side of life. I thought about my siblings who continue to cheer me on, although my younger brother has sometimes not been able to make sense of the risks and restrictions involved in the work I do. One of the times I mentioned one possible war torn place I could get posted to, he looked at me incredulous and reminded me that it did not have to be this job. He had me reeling in laughter! The restlessness in me and my love for adventures is what probably says to me that it’s okay. My family has come to accept that, and they give me all the love and support I need. There has to be much more to life - I say that to myself all the time, especially as I recount these and try not to feel guilty in comparison to the people who have brought me out here in the first place. 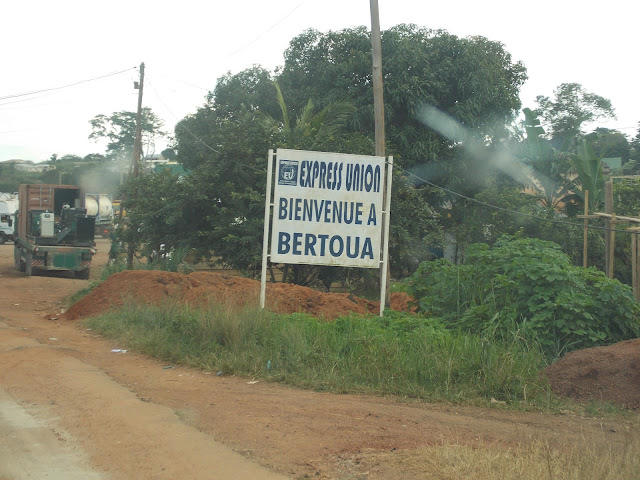 I’ve been in this country for a month already but this is the first time since I got here that I have thought of Bertoua as home. So I am looking forward to going home albeit for a few days, before I head off to the field again in another region of the country :-)