We left home earlier, at 6:50am, as we had a stop to make before going to work at 8:30am. Thankfully, we both start at the same time. At about 7:05am, right ahead of us, we saw this biggest flame of fire we had both ever seen, my sister was calling my name and gripping my arm so tightly, the fire exploded which caused the entire area to shake and there was such a loud bang!

It was scary to behold. The man in the car beside us immediately said that was a bomb, nothing else could have had such an impact. I asked him to hold off with making suggestions as it may be a car that exploded but he went on to educate me as he is an Engineer. All that suddenly became irrelevant because people were asking all to get out of their cars. My sister was panicking but I managed to stay calm.

When we got out, people tried to reverse and get away as we watched the inferno engulf cars, getting closer was out of the question. More people started to reverse so that those closer to the fire could get away then I spotted a friend, she got out of a car that was a lot closer to everything. She was overwhelmed with emotions as she had watched the car boot in front of her rip off. We talked briefly but knew we had to leave the area as nobody knew if another explosion would be set off. We got into the car and managed to get away.

As I drove, my hands were shaking, I was scared, I felt particularly vulnerable at that moment but felt responsible for my sister who just wanted to be away from everything. My parents and others were calling and speaking to her, she understood to let me concentrate and drive. My mum who felt the impact of the explosion from home insisted she needed to speak to me. She reassured me that all was well and asked me to concentrate on driving us away from the area.

We were lucky that morning but not everybody was. People left their homes just like we did but lost their lives to a senseless cause that many of us do not understand. That morning was tagged ‘Black Monday’ by many. But this is just one isolated case in Abuja I would say. Because this happened in the capital State, it was widely publicised. How about the many who die daily in Borno, Adamawa and Yobe States? Some have also died in Plateau, Katsina, Kaduna and Kano States. Do they and their families not deserve compassion too?

As much as I am grateful to be alive, I cannot help but ask all these questions. Some people may have lost any sense of feeling left in them because they have to watch things like this happen every day. I am traumatised and will be unable to get what I saw out of my mind.

I got to work shaken and confused. I sat in the office all day with my head pounding, it actually felt like it would explode. I wanted to cry but had to keep myself composed since I was in the office. I looked lost for the most part of the day and of course, I was very unproductive.

I saw different tweets, some blaming the President, some went on about how nowhere was safe while some made light of the situation. After analysing different views, I have to say unfortunately, many may have become too complacent with what happens around us. The feeling of 'thankfully it wasn’t me' is beginning to rule our way of thinking. But that being the case, it may not be very long before it will be you or someone you love.

People’s lives ended because they lost loved ones in the carnage that morning, how much longer do we need to wait for? We all need to come together in unity, get past our differences and find a solution. We keep waiting on the government, but the government does not have all the answers. We need to provide some.
I saw a brilliant idea proposed by a former class mate: Seember Nyager (Nigerian Procurement Monitoring Project), asking a few questions…if CCTV cameras were actually procured as that made up the budget in 2013, where they might have been installed, and if this blast could have been avoided?. It is time to be a part of the solution and stop trading blames, that has taken us nowhere. 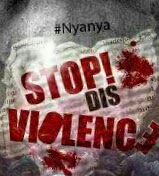 We love to pray, that is great! But we also need to act. Please back all your prayers for Nigeria up with actions. Do take a moment to look at what Seember is proposing and contribute, as these ideas will get compiled and sent to relevant authorities. Little as it may be, let our voices count for something.


The conversation so far can be found here. Or tweet at me @tammyabah or her @Seember1 or @ppmonitorNG.

May all who have died in similar attacks rest in peace and we wish the injured ones quick recovery. My heart goes to out to all their families...