There has been nothing but madness going on around the world!

I woke up yesterday to twitter buzzing with news of a young woman who went to church to study in Benin, Edo state of Nigeria. Uwa, a 22-year-old woman, was raped, her head smashed with a fire extinguisher and she was left in a pool of her blood to die…IN CHURCH! #JusticeforUwa

As I scrolled on to see more details, I read about Jennifer, an 18-year-old girl, who was gang raped by 5 men in Kaduna state. I got outraged when I googled to see if anything had been done, only to see that the family was willing to accept a settlement. That would never repair the damage that was done to her and I am glad that people are demanding that justice be served to the boys. #JusticeforJennifer

There was one more hashtag…#JusticeforTina. From what I read, Tina was 'accidentally' shot by a trigger-happy policeman who was trying to enforce the curfew in Lagos. He seemed to have been asking for a bribe to let the bus go but the driver refused and was shot, an altercation ensued, and he shot randomly into the crowd. The bullet hit Tina, a 16-year-old girl. Why do policemen need to shoot at all to pass their point? And this is not a one off incident! 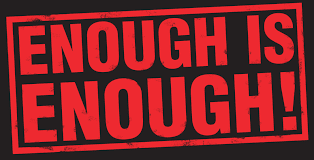 In Nigeria, so many issues have continually been highlighted. We have been asking for so long for the Nigerian Police Force to be dismantled, reformed and set up all over. There is so much rot in the police force. From SARS (Special Anti Robbery Squad) harassing and arresting people for no just cause but to feed their egos, to illiterate hungry police officers killing people for a bribe, the list could go on. If the system is fixed, they would be paid a decent salary to curb some of these excesses and they’ll be made to understand what exactly they should be doing. They swear to protect us for God sake.

There have been mass murders, massacres in Benue, Kaduna, Plateau, Borno, Adamawa and other states. People live in fear and are helpless. The government is not doing enough to put an end to these things. People let sentiments and tribalism lead their decision making which has continued to hold Nigeria back and keep the country where it is. However we look at it, some people are benefitting from this carnage and it is in their interest for it to remain which is reprehensible really. Then the judicial system which is barely functional, is rife with corruption.

“The National Bureau of Statistics (NBS), in a report about poverty and inequality from September 2018 to October 2019, said 40 percent of people in the continent's most populous country lived below its poverty line of 137,430 naira ($381.75) a year. It said that represents 82.9 million people.” How is this ok? In a country of about 200 million people with a vibrant and energetic youth? Yet I continue to read of loans accumulated by the government plunging the economy into further debt. How do these guys reason? Nigeria is blessed with natural resources, Nigeria has a vibrant young population and so much going for it that is hardly exploited.

The sense of entitlement many men have, the way women are not given the respect they deserve and when issues of rape come up, people tend to justify it talking of how a woman was dressed or where she was at the time…etc. A woman who works hard for her money gets to be called ‘ashawo’ (meaning prostitute) by every Tom, Dick and Harry with the assumption that what she owns was given to her by a sugar daddy. The patriarchal society is killing us.

I have been equally mad at the killing of black American men and the systemic racism that is destroying that country. I have been even more annoyed at the people who seem to think that people protesting or asking for equality is not justified, or telling people how to carry our protests or how all lives matter. All lives matter but if black people were treated like ‘all’, there would be no senseless killings. Everyone would be standing together from whatever race or creed. There is no right way to protest when something has been going on long enough. People are tired and are willing to force the country to make #BlackLivesMatter. I have friends who worry about their husbands everyday they walk out of the door, they worry about their sons and brothers and it is hurtful to all of us. I watched a video of a black man walking in a neighborhood, oblivious. A group of white men were waiting for him, one had a dog. And they started to beat this black man up for no reason, just for walking. There were at least 6 men, then they let the dog loose to get him. Kicking him, hitting him with a stick and the dog mauling at him. I broke down in tears at that point and first my anger was directed to God. Why would he allow people hate us so much?! He created us right. My faith is a core part of who I am, so I question my beliefs and seek answers from the one who I believe is the creator.

My reaction when I watched the video of George Floyd’s death was; why did one by stander not jump into the scene, why did one of them not throw a stone at the police officer? Yes, they might have been arrested but George did not have to die. I got answers of people telling me that the by standers were probably afraid to get into a fight with a police officer. Well, the fear is all gone now. Sadly George Floyd, Trayvon Martin, Ahmaud Arbery and the many other black people that have been killed has unleashed the rage that people have held back for long enough.

Then I read of some Nigerians wanting to protest about George Floyd’s death in Lagos and I was just flabbergasted. We have a myriad of issues enveloping us but we would rather jump on the bandwagon of international hashtags instead of dealing with our own first? People are dying every single day in Nigeria, in their numbers. Should we not start by protesting about all the issues in Nigeria before anything else? You can't help someone else when your own house is burning!

I have been angry, the tears come as they please, my mind is a bit messed up, I have questioned God, I feel helpless and useless really because I do not know what to do to help right now. So I am doing what I know to do, to put this out there. Enough is enough! Injustice, rape, racism, all this madness needs to stop. We need to hold people accountable, we need to do better teaching boys about consent and respecting women. We need to do things differently. In Nigeria, in the US, in the whole world. I am tired and my head aches, I have had to put my phone off as I find myself reading and checking, there is so much information right now on all these things. When will it all stop?

In the words of Martin Luther King Jr..."our lives begin to end the day we become silent about things that matter".