I was chewing rice and bit on a stone, I felt my tooth break and next thing, I had a piece of my tooth on my palm. I didn't realise that rice here needed thorough washing as there are stones in them. I had only been here for a week when this happened. Oh, I learnt the hard way!
There is no dentist in Kibondo. Thankfully, there was no pain. I was due to go to Dar es Salaam a week from when my tooth broke so I would see a dentist then.

After looking in my mouth and doing some examination, the dentist told me the tooth was infected. It broke in a way that it could only be saved with a root canal filling. I had one of those years ago and it didn't end well. That tooth broke again and had to be extracted. She assured me that it would not be the case, as I would need to put a crown on the tooth to protect it.

A protective cloth was tied on to protect my clothes, a pair of glasses was given to me to protect my eyes from the bright light, and work was about to begin. Drilling, filing, cleaning and suctioning. Those were some of the things that were to be done. There were tools, machines, needles and many metal looking things. They were scary but I chose not to focus on that or else, I might not have allowed them do their work. When the dentist started and I watched some of those things go into my mouth, I would tighten my body but I had to advise myself to relax and let her do her work. She was pleasant, so was her assistant, Z (I've forgotten her full name but it starts with Z), who would always ask if I was alright.

I was given two shots of anesthesia, one on my gum inside while the other on the outer gum near the tooth, but I could still feel pain so I was given one more shot. My mouth felt heavy, my gums and nerves went numb. I watched as so many sharp looking drills and files went into my mouth. The suction machine became my favourite. Whenever saliva started to gather, Z always knew to use her suction thing to take it all out. That was inevitable with having my mouth open for a long time. I was constantly reminded not to close my mouth so it hung open. 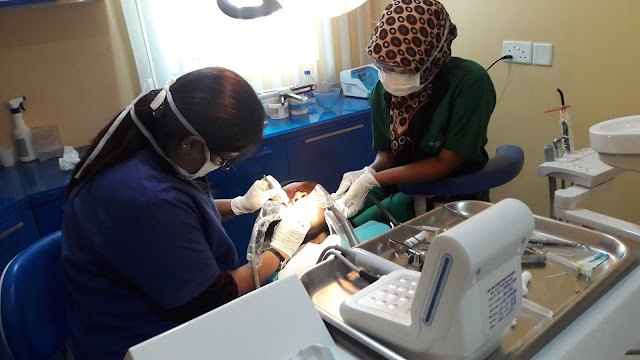 X-rays were done and I was talked through what they were doing and what they were trying to achieve. This worked perfectly for me because if you know me, I ask doctors so many questions. They probably read my thoughts as I was unable to speak.

At the end of day one, the tooth was filed and the infection cleaned out. She had drilled to make room for the canals to be inserted, then a temporary filling was put in. I was told not to eat on that side and if all was fine by the next day, the process would be completed. It all sounds so simple but this took nearly two hours. I was given antibiotics to start taking immediately.

The next day, all was fine and the dentist did not think she would have to give me any anesthesia until she tried inserting the canals for the filling. It hurt so much. She called in a more senior dentist to have a look who took over. He worked quite quickly as he had other patients waiting I assume. He started but it was painful so he gave me two shots of anesthesia, one on my inner gum and the other on my outer gum. He explained while we waited for it to kick in that they were trying to get to the root of the canals. They were worried that a part of the infection might have affected a nerve and so they were trying to clean it to make sure that was not the case. They showed me with an x-ray where they were trying to get and where they had reached.

Please bear with me as this is the best I can explain from what I got out of the dental explanation I was given. I hope it makes sense!

He got to work again and by the time he finished, he said "finished" with satisfaction and told the dentist what he thought she should do next. They discussed and she was back to work in my mouth. She was patient and gentle. She certainly is a perfectionist as if she noticed one little thing was not like it should be, she would take her time to correct it. I liked her, how she worked and how she took time to explain. Z was equally patient and made sure at every point that I was fine. We took a break at some point and I asked the dentist if I could have a photo as I would write my impressions especially because I thought they were great at what they did. She indulged me and had another staff come in to take a photo while she was working. I saw hot metals go in my mouth and the steam coming out of my mouth. I think I was more scared of that than even the drilling and filing machines. Each time that steaming metal was going in, no matter how tired my lips were, I opened them the widest I could! When it comes to doctors, I have absolutely no shame. I allow them do what needs to be done. You have to trust them right?!

The root canal filling was done so my upper right premolar was fine. However, a small cavity was discovered on my last left lower molar. It was a normal filling to be done but of course it had to be cleaned out. There was no need for an anesthesia but as she cleaned and filed/drilled (whatever is that was being done), it left my nerves feeling raw and there was some pain. Each time the pain got bad, I would whimper and she knew to pull out a little. I got tired at some point. My lips were wobbling from being open for too long. My tongue had also become restless and was all over the place. It made me wonder where it was patiently hiding the whole time!
I had been told the day before not to move as the metals are so thin and could break in my teeth or worse, injure me. I think at this point, as I was so tired, instead of just making my sound of pain, I moved. The tool went into my gum and injured me. Immediately, she told Z that I needed some time. Z was always ready with her suctioning machine but not this time. I had to rinse my mouth with the blood in it. What's a visit to the dentist without blood, hey!

After a few minutes, we continued and in no time, it was all over. At least, two hours and a half had passed!
I bit on some gel kind of thing for them to get all my teeth size and measurements for the crown. I was instructed again not to eat on the side of the root canal filling. My tooth felt odd as it was almost half its normal size. The crown on it would make it its normal size again. But I had to be back in a week for that.

A week later, my crown was ready and both dentists went on about how beautiful it was. It was inserted, filed and my tooth was back to normal.

PS
Hospital - Aga Khan Hospital. There is a Dental and Implant section
Dentist - Dr. Laila Hashwani
Senior Dentist - Dr. Faisal Hashwani (he happens to be her husband! Isn't that cool)