Fresh on the block


Safiya works with an international organisation and has done a fair bit of travelling around the world for business and pleasure. However, you know how the experience of travelling to visit a place and travelling to live in a new place vary completely right?


Safiya had been to many destinations in Europe but had avoided London for the fact that she had heard of her 'fellow country people' being scattered all over the place. “When I am leaving home, I prefer to be on holiday from everything familiar” she would always say so she deliberately shunned the U.K.


Safiya finally decided to choose the United States as her destination for further education. On the day of her interview, she walked in confidently, all her documents were intact. She watched as some were denied visas and others told to pick up their passports a few days later. The annoying part with this particular setting is that the hall is in such a way that all the interview cubicles are all the way to the far end of the hall while the seats for applicants are directly facing the cubicles. Everyone can see and hear everything being said.

Some faked accents, some told stories that simply didn’t add up. It was interesting to watch and listen to. Anyway, the line moved pretty fast and the all too familiar sound asking the next applicant to proceed happened to be asking Safiya to proceed this time. She walked up to the cubicle, sadly to the person who had denied almost everyone that went to that cubicle a visa. The first comment the interviewer made was you still have a valid US tourist visa and she said yes I do but it expires in a month and I would like to go for studies this time.

Next she said to Safiya “you have travelled a lot around Europe” and she agreed to that. Safiya was asked if she could speak any other language and she said French. The interviewer as if trying to verify, switched to French and was pleasantly shocked that Safiya was fluent. The interview ended up being in French then the very last question had to be: "are you married"? And Safiya answered in the negative. Her wonderful interviewer had to say at the very top of her voice, in English, "I’m sorry ma’am, you are not qualified for an American visa at this time. Please have a look at this paper for our reasons". The paper was pushed out to Safiya through the tiny space enough only to pass papers.


She turned around and it was like every other person waiting had their attention fixed on her. She smiled so broadly like she had won the lottery, some of the other applicants must have thought she was insane. Getting out of the door, Safiya looked at the paper she was given and the reasons on the paper had absolutely nothing to do with her. Must be a generic refusal notice but sadly it was stated clearly that appeals were not allowed.


Safiya was left with the option of the one place she didn’t particularly fancy, London! The course she wanted to study was only offered in particular places. Luckily, she had looked at the top list of institutions where it was offered and this University in London was her next best option. Anyway, plans started to go to the very place she had been able to avoid this whole time. Within weeks all was set and she was heading to the airport. In Heathrow the next morning, getting to the tube with her two suitcases and hand luggage that happened to be another small suitcase was the next challenge. Luckily she had studied the map of the tube to her destination, there were maps at the tube station also, so that was very helpful. She managed to get all three suitcases on the train just in time for the doors to close.


At some point, a change was required to another platform, the cold greeted her but she loved winter. That wouldn’t be a problem as she was prepared and dressed appropriately. Safiya looked at the flight of stairs right before her and instantly regretted not taking a taxi. It was too late anyway to dwell on that. One by one she started to struggle and make her way down. Different people strolled past her and no one offered to help. That wasn’t a good sign and she wondered if all Londoners were this way. Were she to be back home, people would have happily offered help with these suitcases. One by one she went until all three were safely down the stairs. Then a middle aged man walked up to her, "there is a lift on the other side, didn’t you notice?" "I didn’t actually, thank you" she replied.


The tube appeared and she was thinking of how to scramble along, as it was rush hour, with three suitcases, then roughest looking guy asked if he could help, what could be more pleasant? Yes please and Safiya was safely on her way again. One more stop and she was up and getting ready to start weight lifting afresh. The middle aged man noticed and said “go off with that one when it stops and I’ll help with these two”. Gratefully she got off. Safiya managed not to get lost with the aid of maps and made her way to her apartment. A hot shower did the trick and she was snoozing before she even realised. That rest sure does her good. 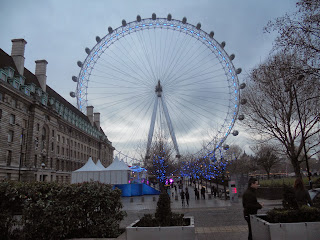 A few weeks later, settling in, Safiya notices that outside there are three bins: one for recycling, one for normal waste and the last, she isn’t sure. On this lazy morning she hears the rubbish truck, she has filled the one for normal waste and a few online orders had come the day before. She dutifully runs out with the cartons inside the house from the orders to be disposed and catches the truck just in front of the neighbours' but with a look of amusement, the man putting the rubbish into the truck says "that’s for recycling init?" "Oh, thank you" Safiya says and wonders what she has got herself into.
Coming from Nigeria where all rubbish is rubbish, this will be the beginning of many strange things, her wahala for London just dey start…